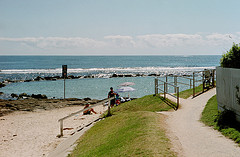 Sited on Cabbage Tree Bay next to the launching ramp for the Search and Rescue Station. This classic ring-of-rocks pool for children is near a stairway, walkways and a toilet block and not far from the lighthouse. Popular with residents of Newcastle and the Hunter Valley and holiday-makers at the nearby caravan park,  this pool attracts photographers.

1870s
The area around Norah Head was farmed.

1903
Many boats were wrecked on the dangerous reefs off Noraville before construction of the Norah Head lighthouse around 1903.

1928
There were boarding houses at Noraville. Access was via the motor bus from Toukley or a launch from Wyong.

1939
The Toukley bridge replaced a previous land route along a bush track.

1960s
The Norah Head pool was popular with people staying at the nearby camping ground.

1997
More than 100 people gathered at Norah Head rock pool to witness the baptism of seven people from Gorokan Baptist Church.

2002
The Norah Head Coastcare group worked to remove noxious weeds at the headland at the top of the rock pool steps. Coastcare Week 2002 included an organism display at the Norah Head rock pool, followed by a rock pool ramble.

This website is owned by All into Ocean Pools Inc,  a not-for-profit, volunteer community … END_OF_DOCUMENT_TOKEN_TO_BE_REPLACED