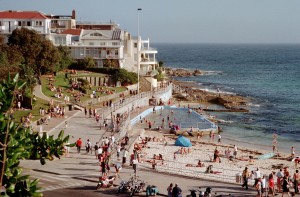 This children’s wading pool  is located below the Biddigal Reserve at North Bond and next to the Wally Weekes Pool. The Bondi Community Art mural mosaic running the length of the children’s pool features sea images.

Historical notes
Bondi was the home, fishing and swimming place for the Cadigal people. Aboriginal rock carvings at the Bondi Golf Course, Ben Buckler Reserve and the coastal walk at Mackenzie’s Point are protected by State legislation.

1889
The Bondi Ocean outfalls sewage system was completed with an ocean outfall at the northern headland known as Ben Buckler.

1899
The Australian Museum first collected stone tools shaped like a scalpel or penknife blade and made thousands of years earlier from the northern end of the beach. Some of these tools, along with other stone implements and artefacts (grindstone, nose ornaments, scrapers, spear points, etc.) and the remnants of an Aboriginal midden containing shellfish debris are now buried under Bondi’s Queen Elizabeth Drive.

Early 20th century
Although Sydney’s Bondi Beach is only a kilometre long, the Bondi and North Bondi communities developed their own surf clubs and ocean baths.

1947
Waverley Municipal Council decided to build a children’s swimming pool (then known as the Mermaid Pool) at North Bondi and construction drawings by consulting engineers were issued on 5 February.

1960s
The Mermaid Pool was reconstructed by the Waverley Municipal Council and a mosaic wall created as a community arts initiative, involving a great deal of voluntary labour. The Bondi Community Art mural mosaic running the length of the children’s pool area features sea images.

1981
In February, surf pollution at Bondi was 1,000 times above the acceptable level.

1998
Waverley Council commissioned an investigation report on the North Bondi Children’s Pool from the NSW Department of Public Services. The report recommended construction of a new intake line through the Wally Weekes Bathing Pool and the existing rock shelf.

2001
Both the North Bondi Children’s Pool and the Wally Weekes Bathing Pool lay within the tidal area covered by a native title claim, which inhibited any expansion of these structures.

Waverley Council commissioned a further report on the North Bondi Children’s Pool  and a review of the Wally Weekes Pool from Patterson Britton & Partners Pty Ltd, an engineering firm with considerable experience and expertise in the design and upgrading of ocean pools. That report recommended using a submersible electrical pump to improve the water quality in the children’s pool, reconfiguring the pipes for the pump and widening the bottom step on the northern side of the pool to match the bottom step on the southern side. Council’s heritage architect approved the proposed modifications.   Waverley Council approved a tender for upgrading of the Wally Weekes Bathing Pool and the North Bondi Children’s Pool, subject to confirmation of available funding.

This website is owned by All into Ocean Pools Inc,  a not-for-profit, volunteer community … END_OF_DOCUMENT_TOKEN_TO_BE_REPLACED