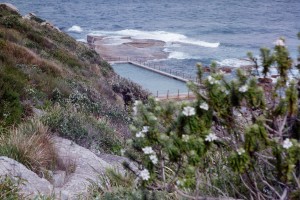 A 32-metre by 20-metre  rectangular, tidally flushed pool with two rock outcrops  forming islands within the pool. Sited on a natural rock shelf with the rock itself forming one side of the pool. Located at the end of a long scenic trek from the surf club and carpark at North Curl Curl Beach.

Historical notes
Early 1900s
A natural rock pool existed in the rock platform below the Dee Why Head area, where camping was permitted for some years.

Warringah Shire was formed in 1906.

1930s
Ratepayers and residents petitioned for the construction of a rock pool at the northern end of the beach. Under the Unemployment Relief Scheme, the North Curl Curl rock pool was constructed by deepening the natural pool at a cost of 400 pounds. A containing wall built by unemployed labour created a pool 90 feet by 165 feet. Swimming competitions were held soon after the pool’s completion.

1957
Construction of the present pool with a small wading area was completed.

1973
Pathways and stairs from the surf club to the rock pool were built.

1998
The pool had cracks in its walls, broken posts and safety chains. As part of a plan to renovate it, Warringah Council engaged a heritage expert to assess the pool’s historic worth. The Council then undertook repairs and reconstruction and contractors fitted new handrails.

1999
Warringah Council began monitoring water quality in this pool and its other five rock pools.  Large surf washed a pregnant woman out of the rock pool and threw her onto the surrounding rocks. She fractured several ribs and swallowed seawater before being winched to safety by a rescue helicopter.

2003
The walk from North Curl Curl via the pool to Dee Why was considered both fascinating and challenging.

This website is owned by All into Ocean Pools Inc,  a not-for-profit, volunteer community … END_OF_DOCUMENT_TOKEN_TO_BE_REPLACED