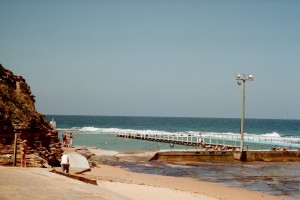 Located at the entrance to Narrabeen Lagoon with access off Narrabeen Park Parade. It’s Pay & Display parking here. The distinctive boardwalk between the pools is an original feature and has been replaced many times. The decking encloses a 50-metre by 18-metre pool within a larger 70-metre by 40-metre pool, while the 60-metre by 50-metre pool reservoir acts as a wading pool. This pool and its boardwalk are  popular subjects for photographers.

Historical notes
Much of the land around Narrabeen was left to the Salvation Army by Elizabeth Jenkins.

1924
Opening of Sydney’s  Spit Bridge brought a rush of day-trippers to the northern beaches and most Narrabeen businesses catered for holiday-makers.

Narrabeen’s rock baths built under the Unemployment Relief Scheme were one of the largest and most distinctive rock baths in the Sydney area. The timber decking was an original feature.

At a Tourist Development Conference in Newcastle in 1935, real estate agent Henry F. Halloran  praised Warringah Shire’s investment of 500 pounds in creating new Rock Baths at North Narrabeen. He saw the rock baths as adding to the attractions of the surf beach, encouraging more people to visit and attracting potential permanent residents.

1993
North Narrabeen had the last remaining beachfront caravan park in Sydney – a popular place all year round and overflowing at holidays.

1996
Pittwater Council asked the NSW government to help pay for storm damage to the popular Narrabeen rock pool. A prolonged wave attack in March had done such major damage to the pool and the decking that the pool could only be used for social swimming and not for swimming competitions or training. Council estimated $82,000 was needed to fix the decking and resurface the inside of the pool.   A seven-year-old boy playing on his bodyboard was washed out of the baths and probably drowned. His body was not found.

2000
Narrabeen Ladies Swimming Club’s Chief Instructor had been involved in the learn-to-swim program for 31 years.

2002
In March, the NSW government created an aquatic reserve from the south end of Turimetta Beach to the ocean pool at Narrabeen Head. Within the protection zone, which extends to 100 metres offshore, recreational fishing is allowed, but there are bans on taking a whole range of intertidal invertebrates including oysters, mussels, crabs and pipis.

2003
The NSW Department of Sport and Recreation had five morning swimming lessons running at the Narrabeen Pool from January 13-23.  A committed 74-year-old winter swimmer planned to ride his motor scooter from Elanora Heights to the North Narrabeen rock pool for his 700th consecutive winter swim meet since joining the Shivering Sharks in 1967. Those 700 swims covered 32 back-to-back seasons with around 22 meets each winter.

2006
The North Narrabeen Rock pool was were praised as one of Sydney’s top ‘plungeworthy’ pools in the Australian Traveller magazine, which noted the pool’s, size, the timber boardwalk defining a 50 metre 8-lane training pool within the larger pool, a sandy bottom devoid of lane markings, alack of outdoor showers, shared use of the pool by three swimming clubs and an active learn-to-swim program.

2007
In January, there were calls for warning signs following the first reported incident that summer of young children using the pool suffering from the a red blotchy rash and itch, known as ‘Narrabeen itch’. The itch is due to a larval flatworm found in shallow water such as the Narrabeen Lagoon. Pittwater Council promised that it would make more information available to the public about marine parasites and place an ‘interpretive sign regarding the many kinds of creatures that can cause stings’  on the lake shore. Anyone stung is advised to see a doctor or visit a chemist for treatment.

This website is owned by All into Ocean Pools Inc,  a not-for-profit, volunteer community … END_OF_DOCUMENT_TOKEN_TO_BE_REPLACED