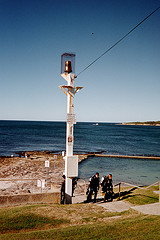 1907
The Oakes Reserve at Cronulla was established by the Sutherland Shire Council because of the stream located there. A well was sunk there in 1907 to serve the influx of summer visitors and residents and a natural pool existed at what is now the eastern corner of the Oak Park Pool.

1909
Residents approached Sutherland Shire Council about construction of a ‘bathing place’ and asked for a Council grant of 10 pounds to supplement 10 pounds raised by private contributions to remove some rock and form a bathing place at the Oakes Reserve. Council was unenthusiastic, believing that ‘a marine engineer with a thousand pounds’ might fail to accomplish the desired result. Despite those reservations, Council was prepared to consider providing dressing sheds at the Oakes Reserve, then considered the safest surfing beach at Cronulla.

Undeterred by Council’s lack of enthusiasm for the pool, the residents constructed their own bathing place at the Oakes Reserve

1921
Tenders were called for dressing sheds at the Oakes Reserve (soon better known as Oaks Park), owing to the popularity of the bathing place.

1922
Council produced a report on the pool idea, having instructed its overseer to report on ‘the best and cheapest method of improving the swimming hole at Oaks Park’.

1926
Council made improvements at Oaks Park  (the name would soon be shortened even further) and called tenders to erect lavatories there.

1927
There were complaints that unless the partitions in the dressing-shed were fixed, there would be ‘mixed dressing as well as mixed bathing’ at Oak Park. All this at a time when Sutherland Shire Council would not allow bathers to parade or loiter on the beach clad only in their swimming costumes.

1930
By 20 December, Sutherland Shire had finished work on the Oak Park pool and it was ready for use during the holidays.

1935
Council spent a thousand pounds on work at the pool. The pool was increasing in popularity and The Hurstville Propellor urged Council to consider enlarging the pool, which often became ‘uncomfortably crowded at weekends and holidays’.

1936
The baths at Oak Park benefited from the 1936 unemployment scheme devised by E. S. Spooner, the NSW Minister for Works.

Residents complained that the recently repaired Oak Park pool was leaking so badly that it was impossible to swim at low tide because the pool only held about two feet of water.   There were also complaints about dogs in the pool and about men who rolled their swimming costumes down to their waists, or even worse, wore only shorts. Installing an inspector at the pool was suggested as the best way to overcome these problems.

1939
W.F. Foster and company built the Oak Park pavilion at a cost of 2,000 pounds to replace the earlier timber dressing-sheds.

1942
The Australian Army erected an observation tower mounted on the Oak Park pavilion and established a gun-post at Oak Park. The gun emplacements were camouflaged as a kiosk with bright candy stripes. The Army banned residents from bathing in Oak Park pool when the swimming season began in October.   To mollify aggrieved residents, a conference was arranged with one of the Army men responsible, Colonel Hurst, and the matter was taken up with the Federal Member for the district, Mr H. B. Lazzarini, MHR. Residents were told ‘this action was taken in the interests of Australia as the end of the war was not in sight’.

There were complaints about dogs swimming in the Oak Park pool.

1993
Questions were asked in the NSW parliament about the inordinate time Sutherland Shire seemed to take to repair leaks in the Oak Park pool. The ocean pool was seen as supporting the electric BBQ facilities and other attractions of Oak Park used by local residents  before and after work and by day-trippers especially on the weekends. Leaks meant people either did not get their swim or had to travel further to use a safe pool when they visited the Park or  picnicked in south Cronulla. Pool leaks also increased the risk of injury to pool users.

Cost of repairs was estimated at 700,000 or approximately  the cost of 30 average backyard inground pools at about $25,000 each.

1994
A blue-ringed octopus was found in the Oak Park pool.

The pool had problems with pollution and leaks. The pool’s leaks were investigated and the pool was closed, so the leaks could be repaired.

1995
The pool had to be drained to remove rotting seaweed.

1998
Oak Park was Sydney’s most polluted beach. The EPA suggested the most likely pollution sources were the cliff-face sewage outfall at Potter Point in the north and stormwater drains at South Cronulla, Shelly Beach and Oak Park. Work commenced on a $410 million upgrade of the Cronulla sewage plant which would reduce the pollution problem.

2001
Cronulla’s sewage plant upgrade was scheduled for completion in early 2001 after almost seven years of discussion. Delays were attributed to the lengthy community consultation process and the higher priority given to the ocean outfalls at Bondi, North Head and Malabar. The upgrade to the Cronulla sewage plant did not reduce pollution relating to stormwater after heavy rains.

2002
Oak Park was one of the cleanest NSW beaches, according to the EPA.

2003
An assessment of the Shire’s ocean pools was identified as a necessary part of the ongoing management of its coastal assets.

This website is owned by All into Ocean Pools Inc,  a not-for-profit, volunteer community … END_OF_DOCUMENT_TOKEN_TO_BE_REPLACED