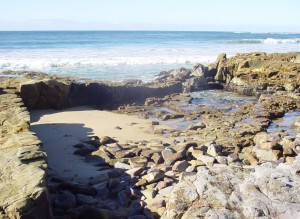 A ghost ocean pool. Its remnants are at the southern end of Thirroul Beach near McAuleys Hill.

Thirroul was for some years one of the premier surfing and holiday resorts in NSW.

1923
The first rock pool at the southern end of the beach near McAuleys Hill was  75 feet long and 50 feet wide and created  by working bees involving up to 50 men at a time. Ladies served afternoon tea to the volunteer workers.

The R. G. Jones photograph collection in the University of Wollongong archives includes a photo of the site of the rock baths at McAuleys Rocks in the early 1900s.

Donations for the baths project amounted to around 60 pounds. Even though the baths were not ready by Easter as hoped, the baths committee  considered progress at the baths satisfactory. Blasting for some days moved the project along. The volunteer workers were commended as having ‘the spirit of Gallipoli’ and sometimes worked until 9pm to take advantage of the tide.

By July 1923, the baths were nearing completion, but funds were still needed for the railings.   The baths were looked on as ‘the biggest boon to the children, who will be taken there and taught to swim’. After teachers at the local school decided to help the baths movement, Mr McGrath gave a fountain pen to every child who collected 10 shillings for the baths.

Opening of the baths was scheduled for the 8 Hour Day October public holiday. The monster opening carnival had races for schoolboys and schoolgirls, diving events, men’s races,  novelty events and music by the Bulli-Woonona Brass Band.   Mrs McGrath opened the baths. The Progress Association erected a stone inscription to honour those who contributed labour (estimated value of 900 pounds) and kind and organised a testimonial fund for W. James and A. Griffiths, who had been responsible for the project’s blasting work.

1933
The South Thirroul Surf club asked Bulli Council to install a better device for keeping water in the baths and suggested that, if sand were removed from the baths, the club members would subject to certain conditions keep the baths clean from then on.

1934
The South Thirroul Surf Club advised Council that the club, though not responsible for the pool, was receiving complaints that the Thirroul pool was filling with sand because there was no stop in the pool outlet. After unemployed men cleaned sand out of the pool, the surf club asked Bulli Shire Council to repair damage the pool cleaning had caused to the eastern and southern ends of the swimming pool. New sea baths were proposed.

1937
Steps to the Thirroul baths had been provided via the Unemployment Relief scheme.

1938
The South Thirroul surf club reformed and proposed a working bee to assist Council to extend the baths.

This website is owned by All into Ocean Pools Inc,  a not-for-profit, volunteer community … END_OF_DOCUMENT_TOKEN_TO_BE_REPLACED