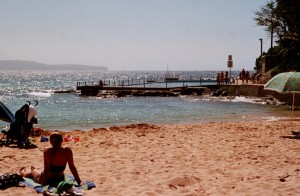 Located at the southern end of Palm Beach, the part known as Cabbage Tree Boat Harbour and Kiddies Corner. It’s Pay & Display parking at this popular Sydney beach, if you get there early enough. Its appearances in TV program Home and Away leads many British and Irish tourists to visit Palm Beach.

Before 1910
Transport to Palm Beach was very difficult, even for the affluent early adopters of the motor car.

Late 1920s
There were few houses on the ocean side of Palm Beach and only the affluent could afford to build second homes there.

To create a training pool, Palm Beach surf club members deepened the existing  pool on the rock shelf at the southern end of the beach and erected a timber post fence. Other beachgoers also enjoyed the pool.

1930s
Unemployed labour built a wall near the pool.

At a Tourist Development Conference in Newcastle, in 1935 real estate agent Henry F. Halloran  praised Warringah Shire’s for accepting a tender of 575 pound for work at the Rock Baths at Palm Beach. He saw the rock baths as adding to the attractions of the surf beach, encouraging more people to visit and attracting potential permanent residents.

1946
Forbes Carlisle, Chief Coach of the New South Wales Amateur Swimming Association and a physiology lecturer at the University of Sydney, persuaded the Palm Beach surf club to sponsor the formation of the Palm Beach Amateur Swimming Club. This club aimed to ‘help young Australians swimmers attain Olympic swimming standards’ by concentrating on boys aged 10 to 20 with good swimming ability. While the Palm Beach Swimming Club trained mainly at the North Sydney Olympic Pool, it had a  ‘summer camp’ lasting three weeks at Palm Beach.  Warringah Shire renovated the ocean pool in 1946.

1948
Much of the Australian swim team’s success at the 1948 Olympics was attributed to Carlisle and the Palm Beach Amateur Swimming Club.

1997
The State Library of New South Wales holds a 1997 photograph of the Palm Beach Pool that forms part of Ian Lever’s series of photographs of Sydney ocean and harbour pools.

2006
The 50 metre Palm Beach Rock Pool was praised as one of Sydney’s top ‘plungeworthy’ pools in the Australian Traveller magazine and recognised as a popular training venue for the annual Palm Beach to Whale Beach open-water swim. Sweeping views of coast add to the pool’s appeal

This website is owned by All into Ocean Pools Inc,  a not-for-profit, volunteer community … END_OF_DOCUMENT_TOKEN_TO_BE_REPLACED