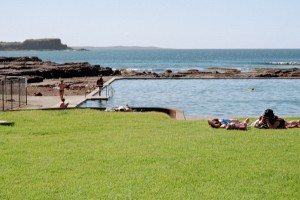 Ocean baths sited on the rock platform at Pheasant Point on the north side of Kiama’s harbour at the north end of the Black Beach Reserve. Occupies a site associated with ocean pools of various kinds since the 1870s.
Images of this pool still appear on postcards of Kiama.

Most of the Australian red cedar brought to Sydney in the 1820s was shipped from Kiama Harbour.

1875
The NSW Lands Department granted a site for public baths on the north side of Kiama harbour in 1875 for an annual rental of one pound.

1877
A Kiama bathing company opened baths consisting of two rock pools surrounded with a concrete edging at Pheasant Point. The charge of tuppence a bath was supposed to pay the keeper of the baths and maintain the pool. Separate specified bathing hours for males and females, created such  ‘confusion and ill feeling’ among Kiama residents, that the baths were soon designated as solely for use by women and children.

1894
After the cedar was cut out, tourism focused on the Blow Hole, baths and beaches complemented the Kiama district’s quarrying and dairying activities.

The Kiama Progress Association erected a dressing-shed at the Ladies Baths.

1900
A NSW government grant was sought to improve the Ladies Baths.

1904
Ladies, gentlemen and children attended a swimming carnival for girls at the Ladies Baths.

1908
The Ladies Baths (90 feet by 45 feet) had a concrete bottom, were furnished with a suite of more than 20 dressing-rooms and included a large open reception area. There were children’s baths alongside the main pool.

1910
The Ladies Baths were damaged by heavy seas.

Kiama Council moved to draw the trustees’ attention to the large number of men hovering in the vicinity of the Ladies Baths, when the ladies were ‘indulging in a swim’.

After a report that two men had thrown stones down to the Baths from the cliffs when ladies were bathing, the Mayor decided to prosecute persons annoying ladies at the Baths.

1924
The Ladies Baths were invaded by male visitors during holidays. While consideration was being given to creating continental baths for Kiama, Council prohibited mixed bathing until the ‘proper sheds’ existed. Men kept using the Ladies Baths to teach their children to swim and whenever the men’s baths at Kiama’s Blow Hole Point were unavailable.

1927
Minor improvements were made to the Ladies Baths.

1930
Segregated bathing at Kiama’s Ladies Baths was still attractive to visitors, even though continental bathing had been available at set hours at the Blow Hole Point Baths since 1928.

1934
Construction of Olympic-sized continental baths (mixed bathing) baths at Pheasant Point began as an unemployment relief project, halted when the funds ran out, then resumed with NSW government funding as part of an overall program of town improvement works. Fill from the baths was used to enlarge the playing area on School Flat near the Kiama Infants School. Over the holiday season, the surf club’s beach inspectors supervised the incomplete Olympic baths which had been equipped with temporary conveniences and dressing-sheds.

1937
The diving hole at the Olympic Baths was nearly complete.

1940
Dressing sheds were added to the Olympic Baths, then Kiama’s premier swimming venue. The full vision for Kiama’s Olympic Baths was never realised.

1958
Kiama’s swimming club wearied of the difficulties of staging competitions at the Pheasant Pool Olympic pool. Pumps shifted water ‘from the pool at the far end into the pool at the near end’ to provide enough water for the annual Kiama District Swimming Club carnival.

1980s
Kiama Council filled in one of the Pheasant Point pools. In 1982, the Kiama Amateur Swimming Club was still swimming at the Olympic pool pending completion of a 25-metre indoor pool under construction in the Terralong Sports Complex. With the opening of Kiama’s inland aquatic centre in the 1980s, the Olympic baths ceased to be Kiama’s main competition and training venue. Like the Blowhole Baths, the Pheasant Point Baths once more became primarily a recreational facility and social centre.

This website is owned by All into Ocean Pools Inc,  a not-for-profit, volunteer community … END_OF_DOCUMENT_TOKEN_TO_BE_REPLACED