You are here: Home / Ocean Pools / Port Kembla Olympic Pool (*Not an ocean pool but a magnificent saltwater pool) 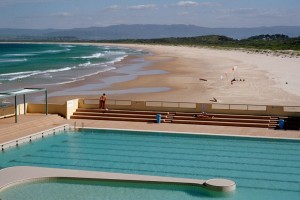 Not a classic ocean pool, but a magnificent saltwater on the hill at the north end of Port Kembla’s magnificent South Beach. This is a lido-style seawater pool, catering for swimmers and sunbakers. A swimming experience more comparable with the North Sydney Olympic Pool, than with the Merewether Ocean Baths. Water comes up to this pool in a pipe and no waves splash over the side.

Historical notes
Extensive deposits of Aboriginal shell middens in the dunes at MM beach testify to extended use of the area.

1800s
Known by the settlers as Illawarra Farm, the Five Islands or Red Point.

A military garrison and stockade relocated from Red Point in Port Kembla to the boat harbour at Wollongong in 1829.

In 1897, the NSW Public Works Department selected Port Kembla as the most suitable deep-water port for shipping coal from the Illawarra coal mines.

1907
The Electrolytic Refining and Smelting Company of Australia Ltd (ER&S) copper refinery and smelter  set up at Port Kembla in 1907 to process the ores from Mt Lyell in Tasmania.

1916
Metal Manufacturers Pty Ltd (a manufacturing company established by Australia copper producer Mt Morgan and Mt Lyell and its English partners British Insulated and Helsby Cables) set up in Port Kembla. MM activities included a wire factory, a telephone cable factory and tube factory. MM became a major consumer of the ER&S refined copper. MM gave its name to the beach in front of its workshop and next door to the Port Kembla steelworks.

1934
Central Illawarra Shire granted 4,000 pounds for pool construction at a site chosen after consultation with the Town Planning Association of NSW.

1935 to 1937
Horse teams worked on the pool construction. The levelling-off of the site and excavation work for the baths and construction of the approaches were carried out as an unemployment relief project and award wages were paid for the remaining work.

By 1937, the dazzling art-deco Olympic pool was ready for opening and had cost 16,590 pounds. There was a tiled wading pool 60 feet wide by 300 feet long  with a depth ranging from 1.5 feet to 2.5 feet . The main tiled Olympic pool built to NSW Amateur Swimming Association standards was 165 feet (55 metres) long and 60 foot wide, with a depth ranging from 3.5 feet to six feet at the edge of the diving zone and deepening to 12 feet for the diving zone and then  reducing to four feet to provide starting facilities for backstroke races. It had seven racing lanes, a five-metre diving tower, an eight-metre diving tower as well as a one-metre springboard and a three-metre springboard all to Olympic standard and 32 underwater floodlights.

The Illawarra Tourist Zone Committee co-operated with arrangements for the opening of the Port Kembla Baths. For the weekend of the pool’s opening, Port Kembla was decorated with flags and bunting. Eric Spooner, the NSW Minister for Public Works and Local Government, opened the pool in the presence of the Shire President, councillors, the shire clerk and deputy clerk of Central Illawarra Shire,  the President of the Local Government Association and the Mayor of Bathurst. The Port Kembla Carnival Committee, the Port Kembla Town Band, the Steelworks Band, the Illawarra Branch of the Surf Life Saving Association, the Illawarra Tourist and Publicity Bureau, Metal Manufactures, Australian Fertilisers Ltd, the Electrolytic Refining and Smelting Co. of Australia Ltd, and the NSW Amateur Swimming Association were thanked for their contributions to the festivities.

The pool rated  ‘equal to any in Australia’ was considered a tribute to the skill of Shire Engineer, Mr B. C. Griffith, the electrical engineer and their workmen. The baths were seen by the local Member of State Parliament (W. Davies M.L.A.) as a means of producing swimming champions and a healthier community and providing a still water facility where the NSW Education Department could arrange for every child to learn ‘the necessary skill’ of swimming.

Some five thousand people, probably the ‘biggest crowd ever witnessed in Port Kembla’ watched the opening, many from no-cost vantage points on the hill overlooking the Baths.   Central Illawarra Shire Council gave the South Kembla Surf Lifesaving Club permission to sell icecreams and drinks at the baths pending appointment of a permanent caretaker and accepted the surf club’s offer to patrol the baths on weekends. A Port Kembla Amateur Swimming Club formed with the new pool as home base, but decided not to affiliate with the NSW ASA until the next season.

The new pool was a tourist attraction. Along with Central Illawarra Shire Council, the Port Kembla Traders Association, and the two local surf clubs, the swimming club organised a carnival to entertain thousands of visitors arriving by special train on a Railway Touring Club excursion. The Shire President donated trophies for champion male and female swimmers resident in Central Illawarra Shire. Some 3,000 people gathered around the baths for the carnival offering swimming races for men and boys, ladies and girls, and exhibitions by champion NSW swimmers including ‘an imitation of a butterfly’.

1938
The Port Kembla Ratepayers Association asked that a laundry be erected at the baths. While in NSW this seems an odd combination of functions, many examples of public bath-houses combined with public wash-houses existed in Britain.   Port Kembla Amateur Swimming Club provided six members to act as inspectors at the baths and requested they be issued with inspectors’ badges. The club also planned a swimming carnival with half the proceeds to go to the Central Illawarra Shire Council.   Despite the admission charge, the Baths were popular. In the fortnight ending 15 January 1938, cash takings at the Baths amounted to nearly 80 pounds, as several thousand people had visited the baths and passouts (for the purpose of surfing) had to be  issued. In the fortnight ending 12 February, the Baths takings amounted to 38 pounds and ten shillings, while the two weeks to 26 February yielded takings of 33 pounds, 16 shillings and fivepence.

1939
A channel was cut into the rock to improve drainage of sand near the outlet valves. Council’s Baths Committee recommended adding spikes to deter people climbing over the wall near the entrance steps, providing a club room locker and adding hat and coat racks to the men’s changing-rooms and the west wall of the sun-room.

Night swimming was limited to three evenings a week from 19 March until the season ended on 30 April 1939.

1940
The Port Kembla Olympic pool proved very popular with locals, with 6,519 people attending in the first two weeks of January.

A 1940 carnival at Port Kembla included a record-breaking 100 metre swim by Empire and Olympic games swimmer, Evelyn de Lacy, and competitors from the Wollongong Amateur Swimming Club. The carnival attracted a crowd of some 870 persons and raised 27 pounds, ten shillings and eleven pence to be jointly shared between the Port Kembla Amateur Swimming Club and the Central Illawarra Shire Council.

Mr W Davies MLA said the baths were ‘one of the finest in the state’, the club had made ‘magnificent progress’ and that he hoped Central Illawarra Shire would build the ‘vitally necessary club rooms’. He regarded swimming baths as ‘essential to everyone in the state from a point of physical fitness as well as pleasure’.

Eighty members of the 2nd AIF from the Ingleburn camp visited the pool for inspection in February. As a gesture to the AIF, Council decided to open the baths free during morning physical training period to ex-AIF men on garrison duty.

1942
After the pool opened on 3 October, some 1,200 people visited the baths in two days of very hot weather, but numbers dropped as the weather cooled. As the baths were still showing a loss every year, Council’s Baths Committee was asked to review admission charges.

1943
The pool was particularly popular in December, thanks to efforts by the Baths manager. Council gave the baths inspectors the power to prosecute regarding straying dogs.

1944
A government grant funded the NSW Amateur Swimming Association learn-to-swim campaign which aimed at teaching as many people as possible in the State to swim and which offered instruction at Port Kembla in February. A Boy Scouts district swimming carnival attracted some 200 cubs, scouts and rovers to the baths.

1945
Efforts were made to organise a Sunday bus service to the Port Kembla Baths by the next summer swimming season ”for the public who would attend the baths if the service was provided’.

1950s
As thousands of migrants from Europe came to work in Port Kembla’s steelworks, the pool became an increasingly important part of Port Kembla culture. For post-war migrants working at the steelworks and new to Wollongong and to Australia, this pool was a very attractive social and recreational space.

1996 & 1997
Extended swimming season trials in 1996 and 1997 resulted in Port Kembla reverting back to its traditional season.   With the cost of rebuilding the pool estimated at $3.25 million, Wollongong City Council set aside $1 million and agreed to hold back on projects in other areas, so the work on the pool could start in 1998.

1998
Wollongong City Council closed the rundown pool for $4.3 million of renovation work.  2000  The replacement pool opened for use on the same hour of the same day as the original 1937 pool. The new pool contains a modern beach entry, a wading pool, a 15-metre learning pool, as well as the Olympic pool, toilets, showers, dressing-shed, lifeguard observation tower, disabled access and meeting rooms. It was highly commended in the design and construction category of the Institute of Public Works Engineering Australia Excellence Awards.

Because the new pool hadn’t opened until 20 February, the pool was kept open for a 6-week extension to the normal season as requested. There is no charge to swim at this pool.

2003
The pool hosted the 500-metre swim leg of the Illawarra Triathlon Club’s final summer race.  Maintenance problems at the pool included cracked tiles which fell off, concrete corrosion on the concourse surrounding the pool and discolouration. Wollongong Lord Mayor, Alex Darling, said Council would ensure the repair costs did not fall on ratepayers and that the community had a first-class facility.

This website is owned by All into Ocean Pools Inc,  a not-for-profit, volunteer community … END_OF_DOCUMENT_TOKEN_TO_BE_REPLACED