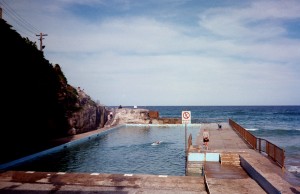 Located at the north end of Queenscliff Beach, a pleasant walk north from Manly Beach. This pool is a shallow and has sides that are not parallel, but is still a serious swimming pool (50-metre by 14-metre) with marked lanes and a swimming club building. The pool is cut into the rock platform and has formed concrete walls on all sides.

Historical notes
1881
The Queenscliff area developed rapidly after the surrounding land was subdivided.

1914
Queenscliff was a favoured holiday centre offering the usual range of holiday shacks and tents for hire.

1937
The rock pool was built as part of the Unemployment Relief Scheme. Manly Council was constructing a stone wall along the ocean front (North Steyne) and was prepared to take any stone from the excavation for the Queenscliff rock pool. The QSLSC maintained the pool for a few years, before Council took over this responsibility.

1942
Warringah Council reportedly considered concreting the cliff-side of the pool and providing drains to catch run-off from the cliff-face.

Around 1950
The cliff-side of the pool was concreted and drains provided to catch run-off from the cliff-face.

Campaigning for a State election in 1961 saw dedication of a site for a clubhouse near the pool. That clubhouse now hosts the Queenscliff Women’s and Men’s Swimming Clubs.

1982
Steps to and from the rock pool to the area above it were repaired.

1985
Repairs were made to the clubhouse. The Queenscliff pool was included as a heritage item on the draft Warringah Local Environmental Plan after the Warringah Heritage Inventory review identified it as having State or regional significance with the themes of ‘leisure: organised and unorganised’ and ‘cultural and social life’.

Early 1990s
The pool was almost entirely reconstructed to produce a mechanically flushed 50-metre by 14-metre pool. The pool pumps were normally  installed each September and taken out the following April for servicing.

1999
Warringah Council began monitoring water quality in this pool and its other five rock pools.   During remediation works on the adjacent outlet for Manly Lagoon, the pool was filled in and major pool repairs were undertaken.

2000
To allow tidal flushing of the Manly lagoon, its outlet low-flow pipes were extended into deep water past the end of the Queenscliff rock pool. The impact of this work on the visual significance of the rock pool was considered both minimal and acceptable in heritage terms. Extensive work on the southern side of the rock pool was carried out when the low-flow pipes were installed.

2001
Concerns were raised about the state of the pool concourse. In accordance with standard practice, lane numbers were marked in September, just prior to the commencement of the swimming season.

2003
The rock pool featured in advertisements for two-bedroom, two-bathroom units priced around $995,000.

This website is owned by All into Ocean Pools Inc,  a not-for-profit, volunteer community … END_OF_DOCUMENT_TOKEN_TO_BE_REPLACED