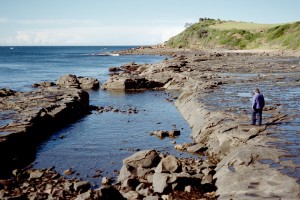 A ghost pool. Remnants of baths cut into the wide rock platform at Gerringong’s Boatharbour, south of the modern boat ramp.

1820s
Gerringong was known as a small boat harbour from which much cedar was shipped. Once the cedar was cut out, dairying became the district’s main industry.

1884
Jetty works from 1884 established Gerringong as a regular destination for small ships until about 1900.

1893
The extension of the railway to Bomaderry in 1893 lured the lucrative milk trade away from the port of Gerringong.

1910
Gentlemen’s Baths were proposed for Gerringong. The idea was to construct inexpensive (estimated cost of 30 pounds) ‘small but very nice baths’ that could later be enlarged. The public was expected to ‘nobly assist’ with funds raised as far afield as Berry and young men of the district bringing ‘their bullock teams to help clear away loose stones’.

Gerringong’s aldermen thought the two baths would be ‘an inestimable boon’ and believed that everyone would share in the good benefits that ‘would accrue from having a bath for each sex’.   With several local men and women already collecting money for the proposed Men’s Baths, most aldermen felt they should do all in their power to make the Gentlemen’s Baths ‘an accomplished fact’ and believed ratepayers would not grumble at a pound-for-pound subsidy from Council for the project. Others objected to ratepayers’ money being ‘spent out in the sea’ and held that Council should not be involved in work below the high water mark and could not legally spend ratepayers’ money on such work without sanction from the NSW government.

Rather directly fund the baths, Council proposed to buy the material excavated from the baths for use on the roads, while public subscriptions raised the balance of the funds.   Council approached the local Member of Parliament about a grant for the baths, reasoning that if the NSW Government provided funding, Council could also help fund the baths.

1911
Gentlemen’s Baths were built.   1927 Seaweed clogged the Men’s Baths, but not the Ladies Baths.

Perhaps inspired by the Coogee shark net, Gerringong Council debated erecting a shark-proof fence outside the Men’s Baths to increase the swimming area and keep the seaweed out.

While the reserve at Werri Beach was a camping area with fees set by Gerringong Council at five shillings per week or one shilling a night, the reserve established at Boatharbour remained the ‘ratepayers’ reserve’, the only seaside reserve in the municipality where camping was not permitted.

1930
Council noted that ‘costumes often worn at the Men’s Baths are not such as would be worn to continental bathing’.

1931
The Men’s Baths were very costly to maintain and again filled with seaweed. Sharkproof nets were thought no match for Gerringong’s waves and the seaweed.

1932
Both the Men’s Baths and the Ladies baths at Boatharbour were in use and by October the Men’s Baths were ‘free from seaweed which had caused so much trouble in the past’. Council was even considering a federal loan to create a continental bathing place.

1933
The Mayor was certain that ‘everyone would like to see really good baths at Gerringong, but seaweed was the trouble’.

1935
Stones were being washed into the Men’s Baths.

1937
By February, both the Men’s Baths and the Ladies Baths were leaking and empty.

1942
Both the Boatharbour baths were in a bad state, hardly fit to swim in. Cleaning of both the Men’s Baths and the Ladies Baths had to wait until a suitable tide.

2004
Remnants of the Boatharbour Men’s Baths were still visible.

This website is owned by All into Ocean Pools Inc,  a not-for-profit, volunteer community … END_OF_DOCUMENT_TOKEN_TO_BE_REPLACED