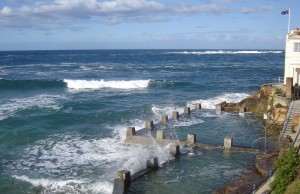 Sited at the end of Carr Street, Coogee Beach, right alongside the Coogee surf club, which provides toilets and change rooms.  Two winter swimming clubs, the Coogee Penguins and the Coogee Huskies are associated with this pool. This pool has walls resembling the top of a sand castle and this makes it attractive to many photographers and other artists.

There are suggestions that Coogee’s Aboriginal inhabitants traditonally set aside the northern end of Coogee beach for men’s activities and the southern end for women’s business.

1887
Opening of the Coogee Aquarium which offered a range of amusements, including an indoor swimming pool in a building with a distinctive large striped dome.

1928
Opening of the Coogee pier, an English-style pier entertainment complex with a theatre, ballroom, restaurant and shops.

1929
A massive shark net attached to the famed Coogee pier offered safe swimming day or night. The shark net’s 600-foot by 470-foot swimming enclosure could accommodate some 10,000 bathers at a time. This pay-to-swim facility with an admission charge of one penny attracted crowds of 30,000 a night for night surfing under floodlights. Coogee Beach was promoted as the safest surf beach in Australia and other coastal councils considered creating similar enclosures.

1947
Built by Randwick Council and funded by 963 pounds of the compensation payment from the Commonwealth government to Council for war-time damage to Randwick’s beaches. A further amount of 350 pounds was required for protective walls, drainage improvements and paths. Residents requested steps from the Coogee surf club leading to the new Coogee pool.

The Coogee-Randwick Ratepayers and Citizen’s Association suggested dedicating the new baths to Roscoe Samuel Jones, who was alderman for Randwick’s East Ward from 1934 to 1937 and closely association with the Coogee Surf Life Saving Club. With agreement from the Jones family, Randwick Council arranged for a commemorative plaque to be placed on the rock face near the stairs.

1970s
The Randwick & Coogee Amateur Swimming Club swam at the Ross Jones Pool for three months, while negotiating to use the Coogee-Randwick RSL Club pool.

1980s
The Randwick & Coogee Amateur Swimming Club formed a winter swimming arm that began its 1980 season at the Ross Jones pool and ceased its activities at the end of the 1982 season.

1993
The pool was filled with sand, making the swimming area unusable for winter swimming by the Coogee Huskies and Penguins. Council was cleaning the pool by using mechanical bobcats and shovels to tip sand over the pool walls, rather than by regularly draining the pool and repairing it monthly.

1994
The National Trust classified this pool and listed it on its heritage register.  The Coogee Penguins club, which swam there on winter Sunday mornings, promoted itself as a family club boasting equal numbers of male and female members.

This website is owned by All into Ocean Pools Inc,  a not-for-profit, volunteer community … END_OF_DOCUMENT_TOKEN_TO_BE_REPLACED