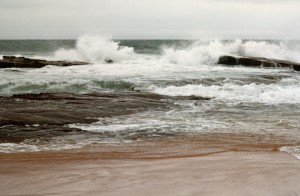 Remnants of this ocean pool exist on flat rocks at the northern end of Scarborough Beach near the outlet of a stormwater tunnel.

Historical notes
Early twentieth century
Scarborough attracted some tourists, but its main role was as a home for coal-miners and their families.

1923
The Scarborough-Wombarra surf club proposed construction of a rock pool in the flat rock at the northern end of the beach, that its members could use for training. Public-spirited citizens quickly donated 20 pounds, recognising that the pool would offer an additional attraction to visitors.

1926
The Scarborough swimming baths were built below the Presbyterian Church by voluntary labour. The concrete walls enclosing the pool were believed to have been built by local coal-miners. With the 70 pounds spent on the baths, half the funds had been contributed by Bulli Shire Council, local people had given hours of voluntary labour and only a further amount of 10 pounds was required.

1937
Although the Scarborough Baths were enlarged somewhat via the Unemployment Relief Scheme, the Bulli Council engineer thought future enlargement efforts should focus on the more accessible and better-situated Wombarra Baths.

1940
The Scarborough-Wombarra surf club complained that the baths at Scarborough and Wombarra were not fit for swimming.

1954
Contributions from the Joint Coal Board, council and local residents helped build the Scarborough community hall overlooking the rock pool and wading pool, and serving as the pivot of the community centre.

1993
Scarborough Beach was often bypassed by travellers who didn’t realise it is there. Parking was limited and the beach access steep.

1998
A $10 million stormwater tunnel was planned to drain water from the Sydney-to-Wollongong railway to reduce the risk of landslides by preventing water banking up behind the railway line, undermining the track and sending floodwaters sweeping through houses below. There were fears that the tunnel would ruin both the Scarborough pool and its beach by burying them in black silt from a former coalmine (closed in 1974) above the railway. The Scarborough Action for the Environment group opposed the project. The NSW Minister for Transport, Carl Scully, rejected alternative plans submitted by residents.

Residents maintained a vigil on Wombarra Beach to ensure there was no damage from the State Rail Scarborough-Wombarra drainage tunnel project. There was particular concern about an area known as moon rock, the rock pool and the rock platform at the beach’s northern end. At least one resident had been swimming in the pool for 70 years. The South Coast Labour Council joined residents in opposing the tunnel.

This website is owned by All into Ocean Pools Inc,  a not-for-profit, volunteer community … END_OF_DOCUMENT_TOKEN_TO_BE_REPLACED