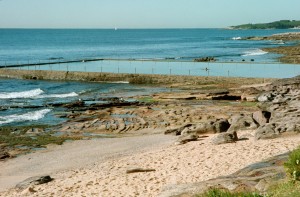 A rock pool located below Cronulla’s Shelly Park with its distinctive dressing pavilion. Linked to Cronulla’s other ocean pools by The Esplanade, a popular walking track.

1899
The original landholders petitioned the government, asking among other things for the Shelly Park reserve to be extended and for a 10-foot reservation on the eastern side of the peninsula. (This reservation allowed the emergence of The Esplanade, one of Sydney’s best walks.)

Early 1900s
This area of Cronulla was ‘notorious for mixed bathing’. Shelly Beach was acknowledged for its natural beauty and considered a suitable site for a ‘splendid swimming basin on similar lines to that on the north side of Coogee’. Residents constructed the initial pool that appeared on postcards.

Sutherland Shire was proclaimed in 1906.

A steam tram linked Sutherland and Cronulla in 1911.

Late 1930s
The formalised baths at Shelly Park were one of the many results of E. S. Spooner’s (NSW Minister for Works) unemployment scheme.

1938
About 30 local residents voluntarily began removing stones from the swimming pool in readiness for the coming season. Council acquired a special lease for the pool from the Lands Board office for construction of rock baths in the beach reserve. Construction of the pool cost 1,300 pounds.

1939
W. F. Foster successfully tendered for construction of the dressing-pavilion and conveniences, at a cost of 1,800 pounds.

Cronulla became the only Sydney beach with a railway station.

1981
In ‘The Year of the Disabled’, a ramp was added to provide wheelchair access to the pool, but sand build-up made this ineffective. Sutherland Shire considered extending the ramp, which would restrict access for most bathers or spending $6,000 to shift the ramp to the north side of the pool.

2002
Shelly Park was one of the cleanest NSW beaches according to the NSW EPA.

2003
An assessment of the Shire’s ocean pools was identified as a necessary part of the ongoing management of its coastal assets.

2006
This pool attracts year-round swimmers with a group of around fifty year-round daily swimmers constituting an informal swimming club.

2007
The Shelly Beach Baths were praised as ‘one of our best pools’ in the Sydney Morning Herald‘s magazine, despite the barnacle encrusted pool walls and the shabby changing sheds. Mostly used by local lap swimmers, this pool’s appeal seemed to be based on it offering a greater sense of seclusion than Cronulla’s other tidal pools, its quiet setting (since the tram terminus at Shelly Park is long gone) with the park providing a buffer from the street and park picnickers and walkers on the Esplanade  making little noise and of course the views out to sea and across Bate Bay.

The nearby Nuns Pool cafe was both a popular breakfast spot and a reminder that this pool (like the ladies pools at Coogee and Wollongong) was popular with the local nuns.

This website is owned by All into Ocean Pools Inc,  a not-for-profit, volunteer community … END_OF_DOCUMENT_TOKEN_TO_BE_REPLACED