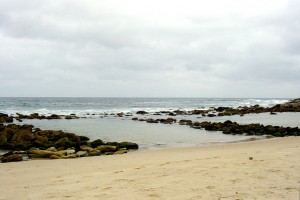 Two adjacent ring-of-rocks pools at the southern end of Maroubra Beach, not far from the South Maroubra surf club and the ANZAC Rifle Range on Malabar Headland. These are pools where children splash and play and adults float and relax, rather than pools for people who want to swim laps. These pools attract few photographers.

1898
The Hereward, a fully rigged clipper sailing for Newcastle, was wrecked at the northern end of Maroubra Bay in gale force winds. The crew of 25 got ashore safely. Remains of this shipwreck became a tourist attraction.

1909
While Coogee was busy with trams and tourist traffic, Maroubra was still a beautiful, isolated beach, still a few miles from the nearest tram-line.

1920s
Maroubra developed as a suburb once a tram-line operated to Maroubra Junction and Maroubra Beach.
The Olympia Motor Speedway opened in South Maroubra in 1925.

1950
To reduce the risk of injury to surfers, Randwick Council began blasting the remnants of the Hereward.

1960s
Navy divers removed the last traces of the Hereward.
When the ANZAC rifle range at Liverpool closed in 1967, many rifle clubs  transferred to Long Bay.

1973
The Department of the Army renamed the Long Bay rifle range as the ANZAC rifle range.

1993
The South Maroubra rock pools  were still popular and a safe haven from the rip against the southern rocks.

2001
The NSW EPA issued a ‘Significant Risk of Harm’ notice on the Commonwealth land relating to the health impact of leachate from landfill under the ANZAC Rifle Range on Malabar Headland.  Council’s report recommended the Commonwealth Department of Finance and Administration better manage the former landfill area under the ANZAC Rifle Range, including fencing off the leachate and stormwater ponds and signposting them as unsafe for swimming and diverting the pond runoff away from the swimming rock pool. A pipe to direct storm water out to sea at Magic Point was completed in 2001.

2002
The NSW EPA accused the Commonwealth government of failing to contain pollutants (ammonia, phosphorus, copper and lead) seeping from a former rubbish tip into the South Maroubra rock pools. The Federal government denied there was a safety risk, which means the EPA declaration remained in draft form.   The local environment group Element wanted fencing and signs around the site, sediments removed for reprocessing and an independent inquiry into the management of the site. A plan of management for the site was released.

Randwick City Council officially closed the South Maroubra rock pools as a precautionary measure until the source of the faecal pollution could be identified and mitigated. Council investigations into water quality at South Maroubra/Malabar had disclosed a high risk of infection from weather flows, even days after rain.

This website is owned by All into Ocean Pools Inc,  a not-for-profit, volunteer community … END_OF_DOCUMENT_TOKEN_TO_BE_REPLACED