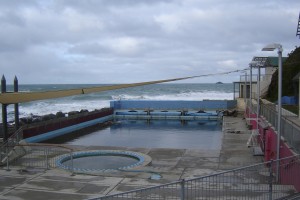 (Image from author’s own collection, taken in July 2009, when the pool cafe was open although the pool was closed.)

Long a tourist icon  and  a unique asset for the City of Dunedin, this open-air pool on
the esplanade of Dunedin’s St Clair Beach is now a pay-to-swim, chlorinated, heated seawater pool, that closes in winter. Both the main 6-lane, 25-metre pool and the toddler’s pool are tiled. This sport and recreation facility is popular with visitors, locals and schools and has a cafe.

1883
Caversham Council voted to dig out a bathing pool at St Clair.

1884
The pool was created and proved so popular with school children and youths that Caversham Council received funds from the City of Dunedin and the South Dunedin Council to enlarge the pool.  Caversham councillors also collected private subscriptions for the free baths at St Clair. The enlarged free baths were opened by the mayors and councillors of Dunedin, Caversham and South Dunedin on 13 December.

1885
The St Clair baths was praised for the purity of its water and for providing protection from hazardous sea-currents, but lacked a caretaker and offered a rather unsatisfactory dressing shed and little privacy for bathers (who were therefore expected to wear respectable bathing costumes). Ladies petitioned to have  the baths enlarged and provided with better facilities for female bathers.

The  requirement that men and women bathe at separate times at the St Clair baths prompted discussion about restricting women’s hours or creating a separate bathing place for ladies.

1886
The St Clair baths had dressing boxes and a caretaker but lacked a solid fence to shield bathers from the public view. Money raised from the St Clair Baths Improvement Committee and entertainments at the baths was presented to Caversham Council to fund improvements to the baths.

The  requirement that men and women bathe at separate times at the St Clair baths still prompted discussion about restricting women’s hours or creating a separate bathing place for ladies.

1887
A group of Wellington ladies gave a gold cross to Mrs Alfred G Price, the wife of South Dunedin’s town clerk,  to acknowledge her bravery in risking her own life to save the life of another woman at the St Clair baths.

Efforts to  raise funds for improving the baths included the St Clair Baths tournament and a swimming tournament organised by a committee of ladies helped. Its program included races for girls and ladies and an obstacle race, but no event had more than seven competitors. The large crowd of spectators included men and women.

1889
The Invercargill Boys’ Tourist Club enjoyed a dip in the baths during their visit to Dunedin.

After receiving a petition asking that the St Clair baths be reserved for the use of ladies from 6am to 11am, Caversham Council discussed the possibility of constructing a separate ladies baths at St Clair.

A charge of indecent exposure bought by police against a bather drying and dressing himself near the St Clair baths was dismissed. It was claimed that the pay-to-use private dressing boxes and the free dressing shed were already crowded when young Mr Hazlett emerged from the water.

1890s
The beaches at St Clair and St Kilda were popular places of recreation for residents of Dunedin’s southern suburbs. Laws designed to keep the beach respectable meant swimmers were restricted to the St Clair baths and
men and women had to use those baths at separate times.

Caversham Council purchased the building at the baths in 1890 and leased the baths for three years to Mr F K Stark.  By the end of 1890, Mr Stark had deepened the pool, painted the dressing boxes, installed a hot saltwater bath claimed to relieve suffering from rheumatism, neuralgia, and nervous affections. Tea, coffee and other refreshments were available to pool users.

By 1891, one man complained that the lack of admission charges at the St Clair baths encouraged crowds of non-bathers to occupy the platform in front of the dressing sheds.

The February 1891 tournament at the baths involved  championship and handicap races, an obstacle race, plate diving, a football match, a cyclists club race, a ladies race, a four widths race, and a greasy pole event. At the 1892 St Clair baths swimming tournament, spectators filled the seats, walls and rocks to witness swimming, diving, a rescue race, fancy swimming and a greasy pole event. An 1893 swimming race for ladies attracted 10 entries. Some 400 people were present in December 1893 to see Ernie Cavill, champion swimmer of Australia, demonstrate his aquatic skills in the bitterly cold water of the St Clair baths on a windy  day when neither the boys race nor the blindfold race attracted any entries. Surf washing into the baths made racing difficult and timekeeping unpleasantly wet at the annual St Clair swimming tournament in January 1894. A February 1895 tournament at the baths involved  the Naval Band, a ‘seahorse’ race in costume, plate diving, a rescue race, a ladies race, a boating club team race, a cyclists handicap and a polo match where the St Clair team drew with the Dunedin Amateur Boating Club. Unfavourable weather kept the attendance low at the St Clair Amateur Swimming Association’s March tournament   which included championship and handicap races and a greasy pole event.

By 1895, the practice of admitting children living in and around Caversham to the baths at no charge had been in force for eleven years and hundred of girls and boys had learnt to swim at the baths, but control of the baths was passing from  Caversham Council to the Ocean Beach Domain Board. Caversham Council succeeded in getting the Ocean Beach Domain Board to both waive its claim that Council owed it back rent on the St Clair baths and to promise council some compensation for the baths buildings once the Board had available funds. The Board was expected to charge admission to the bath at certain days and times and enact bylaws to control the entry of children, larrikins and dogs to the baths.

When the Dunedin Amateur Swimming club staged races at the baths in January 1896, it  implemented the innovative practice of using roped lanes to separate  swimmers and  reduce the chance of any swimmer fouling another. It MArch 1896 tournament at the bath included handicap races for cyclists, ladies and boys, but the final heat of the ladies handicap was postponed due to weather considered too cold for satisfactory swimming. The Melrose Football Club, the University Football Club and the North End Boating Club competed in the Club relay.

The Ocean Beach Domain Board called tenders for painting the dressing sheds at the baths and arranged to have sand removed from the baths in 1896. It decided in 1897 that ‘a substantial wire fence, with standards of railway iron, should be erected round the baths from the bathkeepers’ house to the rocks at the sea end’ and accepted a tender for this work.

By 1898, when the baths were considered in need of urgent repairs, the Ocean Beach Domain Board had no funds available for repair work.

The Dunedin Harriers Club enjoyed a dip in the baths after a cross-country run in 1899.

1900
The Dunedin Harriers Club used the baths as the starting point for a cross-country run,

1927
The St. Clair Salt Water Pool was simply a large hole on a rockshelf. Pool users risked cutting their feet on the sharp shells around the pool.

1939
Men worked with horses and a cart to remove sand from the pool.

1960s to 1980s
After lobbying from the St Clair surf lifesaving club, the pool was concreted and had water treatment and heating equipment installed.

In 1969, Dunedin became the only New Zealand city to install shark nets. It used sharknets to reduce the risk of shark attack at Dunedin’s St Clair, St Kilda and Brighton beaches and no shark attacks were recorded at these beaches after 1971.

1990s
The Dunedin City Council regained control of the pool in 1998 amid growing concern for its future. Community consultation affirmed that even people who never visited the pool regarded it as an iconic Dunedin place, that should be retained and looked after.

2000
The St. Clair Hot Salt Water Pool Development Trust got  involved with fund-raising for the redevelopment of the pool.

2001
Tenders were let for the redevelopment of the pool. The budget for the pool’s redevelopment was NZ$2.05 million. Redevelopment included demolishing old buildings, erecting new buildings, building a new retaining wall, creating a wind break at the end of the pool, developing a new paddling pool and a new pool deck  and improving access to the pool for people with disabilities.

2004 to 2007
There was talk of ending sharknetting at Dunedin’s beaches.

2008
A graffiti attack on the pool’s cafe prompted calls  for improvements to lighting and the installation of security cameras.

As part of the National Jandal day festivities in December, a toy inflatable rescue boat race was held at the St Clair salt water pool.

2009
The pool was closed to the public on one day in January to enable a  film company to shoot an  advertisement.

2011
After the Friends of St Clair community group gained 900 signature on their petition to have the St Clair pool open three weeks earlier than usual, Council trialed the early opening despite spring tides flooding the pool in late-September and washing in seaweed so much mud, sand and seaweed that the pool had to be drained, vacuumed and refilled before it could open.

New cost-saving heat pump equipment was installed at the pool.

A plaque commemorating three fatal shark attacks off the Dunedin coast (Les Jordan at St Clair in 1964, Bill Black at St Kilda in 1967 and Graham Hitt at Aramoana in 1968)  was installed on the St Clair Esplanade.

Dunedin City Council voted to abandon its sharknetting program due to concerns about its effectiveness and its environmental impact.

2012
An average of 400 people per day used the pool in December. The pool water was heated to 28 degrees Celsius.

This website is owned by All into Ocean Pools Inc,  a not-for-profit, volunteer community … END_OF_DOCUMENT_TOKEN_TO_BE_REPLACED