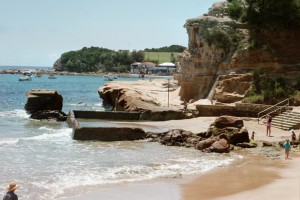 Sited at the southern end of Terrigal beach, an easy walk south from the beach along the Terrigal seawall leads to the rock pool and the boardwalk link to The Skillion.

Historical notes
1827
The district’s first white settler was John Gray, Deputy Harbour Master and Chief pilot at Port Jackson, who was granted 640 acres of land by Governor Brisbane in 1827. Gray named his property Tarrygal and  his assigned convicts grew corn, onions and potatoes, fished, hunted and smoked fish for the Sydney markets.

1928
The ‘beauty beach’ at Terrigal was 7.5 miles of ‘excellent tarred road’ from Gosford  and about a  two-hour drive from Sydney or Newcastle by the Great Northern Road. The road from Terrigal to the Entrance was just ‘trafficable’, while the road from Avoca to Terrigal was ‘practicable in good weather’. Terrigal had many boarding-houses, holiday cottages, a school, churches, a surf club and a progress association and was promoting itself as ‘the sunniest winter spot in New South Wales’.

While Terrigal beach was promoted as ‘absolutely safe for surfing’, there were plans to construct a ‘bathing pool right on the ocean’s edge among the rocks near the Skillion’.

Late 1950s
The rock baths (children’s bathing pool) at the southern end of the beach appear to have opened around January 1957.

1988
Gosford Council assessed the Terrigal rock pool as having high usage, though suitable only for paddling. The pool was flagged for retention.

2004
The pool was still in use, though its walls were not intact. It was still seen as a visitor attraction.

This website is owned by All into Ocean Pools Inc,  a not-for-profit, volunteer community … END_OF_DOCUMENT_TOKEN_TO_BE_REPLACED