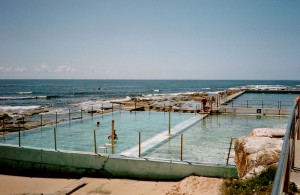 (Image taken in December 2001 prior to the recent  renovation. Author’s own collection.)

Heritage-listed outdoor complex of three ocean pools on Ocean Parade at the southern end of the beach between The Entrance surf beach and Blue Bay.

Pre-1919
Aboriginal people may have used the baths site as a fish trap.

1919
A Naval man, Bob Roberts, bought a property overlooking an area where thousands of swallows nested on the cliff face. Having noted that the nearby beach was rocky and highly dangerous for children and other swimmers, Roberts then cleared rocks from the beach to create a safe swimming pool, later known as Roberts’ pool.

1938
Erina Shire constructed a 50-metre, seven-lane Olympic-size pool at a cost of £425. near the site of the earlier tidal rock pool. This pool filled with tidal water and emptied through a channel at the southern end became a focal point for community recreation, swimming education and competition.

1940
A toilet, change-rooms, pumping station and pipeline were added to the pool.

1947
The baths and their dressing-shed were one of the assets that Erina Shire transferred to Wyong Shire.

1953
The Entrance Amateur Swimming Club was established on 10 July, with Fred Lewis as the inaugural President.

1954 to 1956
During the 1954 and 1955 August school holidays, swimming coach Harry Gallagher brought a group of 40 swimmers from Drummoyne to The Entrance baths. That group included Dawn Fraser, Jon Henricks and Mel Swanson, who were all training for the 1956 Melbourne Olympic Games.

1965
More construction work on the pool complex with addition of a baby wading pool and a medium-sized pool known as the ‘Fred Lewis’ Pool.

1968
Construction of an Olympic pool at Wyong meant students at the Wyong High School were no longer bused to The Entrance for swimming classes.

1970s
The pipeline was enlarged, the pool floor renewed and concourse constructed.

1995
Minor pump upgrading and reticulation works were completed at the pool.

2002
Wyong Council considered charging entry fees or closing this pool due to rising public liability costs. On 4 August, at the pool deck of The Entrance Ocean Baths, a community petition was launched, in association with  The Entrance Amateur Swimming Club and the Tuggerah Tuffs Winter Swimming Club, to heritage list The Entrance Ocean Baths and protect them for future local families. There was overwhelming  community concern for the future of this local icon and extraordinary public support for the campaign to protect and preserve the pools.

The Tuggerah Tuffs Winter Swimming Club regularly set up a campaign table at the Lakeside Plaza at The Entrance to collect signatures from the local community. Similarly, The Entrance Amateur Swimming Club did the same at Bateau Bay village. The many businesses that assisted with collecting signatures for the petition included the Surf Cafe, The Entrance Cinema, Cafe Macaw and The Entrance Book Exchange.   In one month, community activists collected more than 9,000 signatures and were looking at the collection of 10,000 signatures in just five weeks. With assistance from the MP for The Entrance, Grant McBride, the petition gained more than 11,000 signatures. McBride said generations of local families and holiday-makers had learnt to swim or taken their first stroke in the baths.

The Entrance Amateur Swimming Club and The Entrance Ocean Baths provided free swimming lessons during summer to both local residents and tourists.

2003
The pool received heritage listing and Premier Bob Carr visited the Entrance and pledged $330,000 in state funding for the baths. Wyong Shire and community groups had to find the balance of the estimated $726,000 needed for new concrete lining of the baths, a new pumping system, a renewed concrete concourse, improved access for the disabled and a repainted pool surface.

2004
The pool normally stays open all year but is supervised only from 6am to 7pm from Monday to Sunday in summer and 7am to 1pm in Winter. In 2004, the pool closed over winter to allow large areas of concrete to be replaced as part of the $650,000 overhaul, which included repainting the walls of the baths and installing powerful new pumps to improve water quality. Cost contributions included $330,000 from the NSW government, $240,000 from Wyong Council and $90,000 from the baths community trust.

2014
Members of  The Entrance Amateur Swimming Club travelled to Sydney’s Collaroy Rock Pool for their annual February competition with the Collaroy Swim Club  The venue for this annual event alternates between the home pools for these two clubs.

2018
Renamed the Grant McBride Baths in honour of the late Grant McBride, State Member for The Entrance from 1992-2011, and his efforts to protect and sustain the Baths.

2020
The Baths reopened in July having undergone extensive maintenance during its enforced closure due to COVID-19.

This website is owned by All into Ocean Pools Inc,  a not-for-profit, volunteer community … END_OF_DOCUMENT_TOKEN_TO_BE_REPLACED