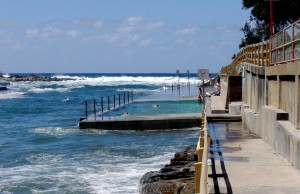 The Clovelly ocean baths are within the promenade on the southern shore of Clovelly Bay that forms part of Sydney’s only concreted swimming beach. This rectangular 25-metre pool with marked lanes lies alongside the normally peaceful waters of Clovelly Bay (also known as Clovelly Pool).

1884
There were only two houses in this area north of Coogee  .

Early 1900s
Clovelly was still known as Little Coogee until around 1914.  The narrow entrance to the small beach set back about 300 metres from a natural breakwater was previously edged, both to the north and south, by rock platforms which extended from the beach out to the headlands. The ‘almost sharkproof’ Clovelly Bay was a popular site for mixed bathing, even though the Bay’s rocky shores made bathing hazardous.

1918
As one of Sydney’s ‘new suburbs’, Clovelly contributed to major population growth in the municipality of Randwick.

1929
Randwick Council won a 2,500 pound grant from the NSW Government to build a breakwater and the promenades as a ‘measure of relieving unemployment’. 1930s  Randwick Council announced plans to build an Olympic swimming pool and a sea wall using gangs of unemployed labour. Attempts were made to construct a breakwater across the mouth of the bay. The project plans were modified after winter storms washed away most of this sea wall, leaving behind a protective rocky reef now visible only at low tide.

1954
The Clovelly Eskimos Winter Swimming Club (also known as the Eskies) was founded by Clovelly surf club members looking for a way to keep active in the winter months. They used Clovelly Bay as their swimming pool. The Eskimos were the fourth ‘official’ winter swimming club following the formation of the Bronte Splashers, the Bondi Icebergs and the Coogee Penguins,.

1962
As acknowledged by a plaque at the pool, Geoff James of the Clovelly surf club proposed the building of a concrete swimming pool. One of the most compelling arguments for the creation of this pool was that its presence meant Randwick Council needed less concrete for the promenade.

1991
Residents claimed the Council was neglecting the basic requirements of the pool and its many users. About 150 Clovelly residents petitioned Randwick City Council about the Clovelly Beach Pool, which had stood empty for five weeks because the pump was not operating. They wanted the pool normally used for swimming lessons each Saturday and for events staged by the Clovelly Amateur Swimming Club to be thoroughly cleaned, a new pump installed and to receive regular maintenance and written reports about the pool from Council.

1994
The National Trust classified this 25-metre by 6-metre pool and listed it on its heritage register.

2000
As part of its State of the Environment (SOE) report, Randwick City Council reported on water monitoring in the Clovelly rock pool.

2002
Randwick Council named the pool after Geoff James, past president and life member of the Clovelly surf club. The Clovelly Eskimos winter swimming club had about 125 members, most of whom were in their forties or older.

2003
Real estate agents said the charms of the swimming baths and snorkelling round the bay helps to attract families with children to Clovelly. Images of the swimming pool’s marked lanes appear in the real estate advertisements for units at Clovelly Beach.

This website is owned by All into Ocean Pools Inc,  a not-for-profit, volunteer community … END_OF_DOCUMENT_TOKEN_TO_BE_REPLACED