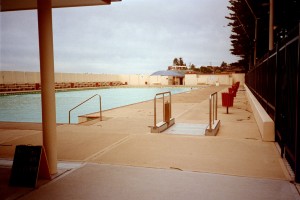 This is not a classic ocean pool, but rather an inground seawater pool sited behind a brick wall, which blocks any view of the beach from the pool and any view of the pool from the beach. It superseded an earlier ocean pool and offered more standardised conditions for competition and lap swimming.

Historical notes
Early twentieth century
Thirroul was for some years one of the premier surfing and holiday resorts in NSW.

1940
Opening of new Olympic Baths at Thirroul attracted about 3,000 people. These baths superseded an earlier ocean pool considered unsatisfactory. The Thirroul Progress Association saw the new baths as the realisation of its dreams and a ‘wonderful attraction’ enabling children to ‘learn the art of swimming under perfect conditions’.

2003
Thirroul became a little bit harder for Sydney visitors to reach after the contentious closure of a stretch of the coast road between Coalcliff and Clifton forced Sydneysiders visiting Austinmer and neighbouring Thirroul and Scarborough to head south on the F6 freeway and descend to the coast via the Bulli Pass.

2004
The Thirroul Swimming Club, based at the Thirroul Olympic Pool, celebrated its 50th anniversary.

This website is owned by All into Ocean Pools Inc,  a not-for-profit, volunteer community … END_OF_DOCUMENT_TOKEN_TO_BE_REPLACED