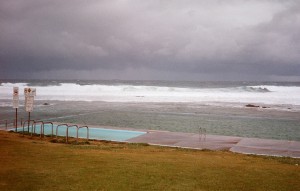 Olympic pool with spectator seating and superb views of the Illawarra coast, Wollongong and the Port Kembla steelworks. Located just south of the site of the 1881 Queen of Nations shipwreck. Photographers have created memorable images of this pool and its patrons.

Historical notes
1880s
Coal mines operated at Corrimal and Balgownie. Though Towradgi was the closest beach to these mines, there was little development of the swampy area near Towradgi Beach until after World War II.

The Queen of Nations was wrecked opposite the outlet of Towradgi Creek, within the outlying Bellambi reef and adjacent Black Rock.

Early 1900s
The lack of development at Towradgi contrasted with development of Corrimal Beach just to the north. Corrimal  was a popular beach and its first dressing sheds were erected in 1911, the year the Corrimal surf club (a continuation of the Corrimal Ambulance and Life Saving Corp formed in 1910)  was recognised.

1930s
Corrimal surf club members got their swimming practice by doing laps of Towradgi Creek from Ziems Hole down to the mouth of the Creek near the surf club.

1947
Several councils amalgamated to form the City of Greater Wollongong.

1959
Work on the pool began with volunteer labour assisted by the Joint Coal Board and Wollongong Council. October saw the first blasting work for the Towradgi pool while November saw the first working bee. The difficulties the local schoolchildren faced in competing with other schools in swimming carnivals triggered the pool’s construction.  1960  Concrete was poured for the Towradgi pool.

1964
Official opening of the Olympic pool coincided with the Tokyo Olympics and involved Alderman Squires, the Mayor of Wollongong, Rex Connor and other local politicians, the Girl Guides District Commissioner, as well as representatives of the Towradgi-Bellambi Pool Committee, the Towradgi Pool Amateur Swimming Club, the Joint Coal Board and local schools and service clubs. The South Coast Miners Federation Band provided music and the Towradgi CWA provided afternoon tea. Celebrations included a sand-modelling competition.   T

Though built mainly by voluntary labour, the pool was handed over to Wollongong Council, which had built the dressing-sheds and financed about half of the 10,000 pound pool project.

1993
Cracks appeared in the pool walls and several swimmers reported being cut on the pool’s jagged edges. Petitions to the council to fix the dilapidated rock baths demonstrated the community attachment to these baths.

1999
A regular swimmer from Corrimal claimed the Council was putting swimmers at risk by failing to adequately clean the ramp leading to the Towradgi pool. Wollongong City Council’s lifeguard co-ordinator said the Towradgi ramp was cleaned about once a week depending on its condition, but noted that weed could grow back in a day or two.

2002
The Corrimal Marlins winter swimming club swam at the Towradgi rock pool and raised money for the Bulli Hospital.

A 68-year-old Bellambi man could not be resuscitated after he suffered a heart attack at the pool.

2004
The St George Illawarra Dragons football team held its annual off-season triathlon at Towradgi. After swimming 10 laps of the Towradgi pool, the players ran north along Corrimal Beach, trudged up and down the sandhills 10 times, then returned to the pool, jumped on bikes and rode along the cycleway to Thirroul and back.

This website is owned by All into Ocean Pools Inc,  a not-for-profit, volunteer community … END_OF_DOCUMENT_TOKEN_TO_BE_REPLACED