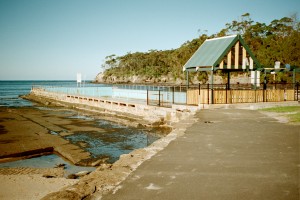 Located south of the Ulladulla breakwater, this is a full-size 1950s Olympic pool of formed painted concrete with marked lanes, rather than a classic ocean pool cut into the rock platform.

The port of Ulladulla shipped people, maize, potatoes, onions, butter, bacon, cheese, fowls, honey and pigs to and from the rich farming areas around Narrawallee and Croobyar creeks and the township of Milton

1959
Work began on the construction of the ocean baths as a full-size Olympic pool, with lane markings. When completed, the pool did not fill with wave and tide action, so a pump was used to fill it.

Ulladulla’s popular camping spots around Millard’s cottage and opposite Ulladulla harbour were free of charge in the 1950s.

1994
On reviewing a regional environment study (including the ocean pool), consultants concluded the pool might have regional significance.

1995
Shoalhaven City Council’s Heritage Study rated the rock pool as high on historical and social aspects and moderate on aesthetic and social significance.

1998
The Ulladulla Harbour Conservation Management Plan, noted that ‘to the south of the working port, there is a separate rectangular shaped ‘rockpool’ enclosure’ near the ‘modern rendered pool set above the high watermark, set on a base constructed from cut stone pieces’.

2001
The pool operated unsupervised until Shoalhaven City Council’s risk consultants warned in December 2001 against continuing to operate the pool without supervision.

2002
The Ulladulla Leisure Centre had superseded the ocean baths as Ulladulla’s best swimming competition and training venue. Even so, there was resident uproar when the ocean pool was closed for a week in February, after Shoalhaven City Council ran out of funds to employ a lifeguard.

2003
The Ulladulla sea pool had a consistent four-star Beachwatch rating for cleanliness,  meaning it was not contaminated and was safe to swim in.

Storm damage meant simply making the pool safe for the next season was estimated to cost $43,000, while the cost of a completely new structure was estimated as around $700,000. Cr Watson said Shoalhaven City Council staff were investigating whether an insurance claim could be made against the year’s storm damage, but conceded that even if the pool was saved, it was likely that the Council would have to levy an entrance fee. About 150 people a day used this free-to-use pool during the summer.

This website is owned by All into Ocean Pools Inc,  a not-for-profit, volunteer community … END_OF_DOCUMENT_TOKEN_TO_BE_REPLACED