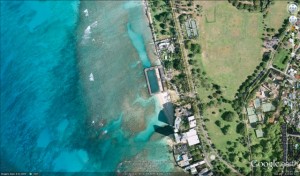 The Waikiki War Memorial Natatorium adjoins Kaimana Beach. Its 100-metre by 40-metre tidal saltwater pool has been closed since 1979 on safety grounds.

World War I
By 1918, Hawaiian citizens had begun to look at ways to memorialise the war service of the Hawaiians, who served in the United States armed forces.

1919
A memorial park was created and the American Legion given control over development of the park.

1921
A Territorial War Memorial Commission was appointed to bold a competition to find an appropriate design for the war memorial.

1927 to 1940s
The Waikiki War Memorial Natatorium had an imposing entrance arch and a 100-metre saltwater pool, that opened in time for the Amateur Athletic Union’s National Men’s Championship swimming competition.

Duke Kahanamoku, Johnny Weissmuller, Buster Crabbe and many other notable swimmers competed and performed at the pool.

World War II
The pool was used in army training.

1979
After decades of neglect, the Natatorium’s 100-metre saltwater pool was closed on safety grounds.

1995
The National Trust for Historic Preservation listed the Natatorium as one of its nation’s 11 Most Endangered Places.

1997
The State of Hawaii concluded that complete restoration including  a re-engineered pool was the most sensible option for the Waikiki War Memorial Natatorium.

1999
Renovations were carried out at the Natatorium.

2000
A controversial  project to renovate the Natatorium and fix cracks in the pool began.

2004
The Natatorium was listed on both the State and National Registers of Historic Places, but large areas of the pool deck had collapsed and the state of the exterior seawalls was a further cause for concern

2013
Mayor Kirk Caldwell and Governor Neil Abercrombie announced a plan that involved spending US$18.4 million to create a new public beach on the Waikiki War Memorial Natatorium site, move the arch and demolish the pool.

2014
The Waikiki War Memorial Natatorium was on the National Trust for Historic Preservation’s list of  National Treasures.

2016
In November, the National Trust for Historic Preservation unveiled a concept plan to allow more seawater into the pool to help keep its water clean and clear and so counter arguments that this ghost pool’s ageing pipes, poor water flow and the poor
quality of its water and decking justify its demolition. Both the Friends of the Natatorium and the Historic Hawai’i Foundation supported this concept plan.

This website is owned by All into Ocean Pools Inc,  a not-for-profit, volunteer community … END_OF_DOCUMENT_TOKEN_TO_BE_REPLACED