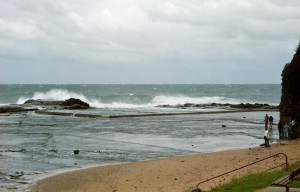 A main pool out on a wide rock platform plus a separate concrete formed children’s pool nearby.
This pool was created in the 1930s Depression to cater for campers rather than local people.

1820s
Gerringong had a small boat harbour from which much cedar was shipped. Once the cedar was cut out, dairying became the district’s main industry.

1890s
The South Coast rail line reduced shipping trade from Gerringong’s Boat Harbour, but far-sighted residents saw the possibilities of bringing tourists to the district and sought dedication of a recreation ground at Lagoon Beach (Werri Beach) only 1.5 miles from the Omega railway station. Werri Beach is the surf beach for the town of Gerringong and occupies the first broad valley south of Kiama. The reserve at this Beach became a favourite picnic spot for Gerringong people and visitors.

1914
The Gerringong Surf Club was formed and a surf shed was erected at Werri Beach.

1928
The reserve at Werri Beach was a camping area with fees set by Gerringong Council at five shillings per week or one shilling a night.

1929
The Local Government Association had confirmed Council’s right to ‘fix camping fees by ordinance or regulation’ and that any person who camped or stayed overnight in any public reserve without permission was guilty of an offence.

1930 to 1934
Camping grew in popularity and the tourist industry started to realise that in many cases, campers spent more than hotel guests.

Werri Beach was so popular that new dressing-sheds were proposed near the rifle butts and the best bathing area.

1935
A Sydney man who had camped at Ourie Beach (early spelling of Werri Beach) for several years complained to Gerringong Council about the lack of baths for campers and suggested baths be constructed at the southern end of the Beach.   Concerned about the need to retain campers and provide an incentive for tourists to visit Gerringong, the Gerringong Council included the proposed pool in the works program for the Emergency Relief Scheme for the unemployed.

It appears this new pool was always thought of as a mixed bathing pool. The push for an Olympic pool by the NSW Department of Labour and Industry eliminated any possibility of a new segregated bathing facility. There seem to be no instances of Olympic-size rock baths being created in NSW solely for men’s or women’s use.

A Gerringong Council delegation discussed the proposed pool with NSW Minister E. S Spooner during his June 1935 visit to Kiama and mentioned that pool construction would yield some very fine road metal. Alderman Hindmarsh explained that ‘a very large number of campers visited the beach and had asked for a swimming pool’ as the surf there was dangerous, and that Council would like the pool constructed by Christmas. The Minister promised to treat the matter as urgent, offered to take the matter up with other Departments of the NSW Government and see if an Olympic-size pool was mandatory and promised to send an engineer down to inspect the site and report back.

In October 1935, the NSW Local Government Department approved construction of a swimming pool up to Olympic standards (165 feet by 75 feet, 9 foot six at the deep end and 3 foot six at the shallow end) at the southern end of Ourie Park under the Emergency Relief Scheme. The inspecting engineer of the Emergency Relief scheme wrote that the work would be undertaken immediately. By December, the road to Ourie Park was metalled and the pool was big enough for swimming.

1936
Work proceeded well until winter. There were concerns about the rate of progress, whether the baths were being constructed at the wrong place, were too exposed and too hard to access at high tide, whether baths of Olympic-size were required and whether the pool would still be unfinished in two or three years. Departmental engineers overruled Gerringong aldermen who insisted that baths a good deal smaller than Olympic size were sufficient for local requirements.

When Gerringong Council sought a grant of 500 pounds for the new baths at Ourie Park Beach in late 1936, the Minister for Local Government and Public Works, Mr E. S. Spooner, was asking for detailed cost estimates. By then, Spooner was encouraging councils to resume their post-Depression programs and forego Emergency Relief Schemes.  By December 1936, Gerringong’s aldermen were certain that constructing a small wall would make the baths fit for use over the holiday season and that ‘if the baths attracted a few extra tourists, they would pay for themselves’.

Income from camping fees from Gerringong was 68 pounds, 14 shillings and ninepence, while expenditure on emergency relief work at the new baths amounted to a little over 150 pounds. Realising that any wall constructed for temporary needs would have to be blown up later, Council decided to provide only a temporary sandbag wall for the holiday season.  Over the Christmas holidays, the Werri Beach reserve was packed with campers, who used the new baths, and looked forward to having them ‘enlarged and completed’.

Gerringong Council was seeking expert advice on the probable cost of completing the baths. Aldermen were arguing that while the reserve was a great asset, the income from camping fees was largely offset by the need to employ a caretaker. 1936 camping fees for Gerringong exceeded 78 pounds.

1937
The costs of completing Olympic-size baths were estimated as 1,320 pounds, while baths 75 feet by 40 feet could be constructed for 800 pounds. Minister Spooner offered Gerringong Council a pound-for-pound grant up to 3,000 pounds covering work on the Ourie Park baths and the Crooked River bridge and foot bridge, subject to his approval of plans and estimates.

Despite fears that locals would consider Olympic baths a white elephant, Council decided to accept the Minister’s offer in principle and call tenders for work on the baths. Gerringong’s aldermen knew the difficulty of attracting tourists off the Princes Highway and the need to spend money on roads.

1939
There were further suggestions for improvements to the Ourie Baths and tenders were called for crushing a large quantity of stone excavated from the baths.

1942
By January, the baths were not filling and two openings were made in the side of the baths to ensure they were filled and ready for use by the Volunteer Defence Corps camp.

1985
The Gerringong Gropers winter swimming club formed. The Gropers swim at the South Werri ocean pool at 10am on Sundays, swim from the South Werri Point to Werri Beach and meet for hot and cold food and refreshment afterwards. They are closely associated with the Gerringong surf club.

2005
Still in use, even attracting the occasional nude swimmer during the winter months.

This website is owned by All into Ocean Pools Inc,  a not-for-profit, volunteer community … END_OF_DOCUMENT_TOKEN_TO_BE_REPLACED