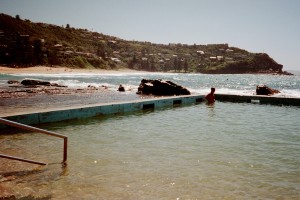 Located at the southern end of Whale Beach. Access from The Strand. It’s Pay & Display parking here. Steps from the south end of the beach lead to the rock pool. Its stone walls give a greenish colour to the pool surrounds.

Historical notes
1800-1905
Whale Beach is believed to be named after a nineteenth-century whale beaching. An 1837 land grant to Father John Joseph Therry covered almost the entire peninsula from Newport to Whale Beach. After his death, the Jesuit order sold these lands to finance the construction of a new Catholic cathedral in Sydney on the site of the burned-down St Mary’s cathedral.

1919
Weekenders and campers began to use the beach after land nearby was subdivided.

1930s
The pool was constructed by unemployed workers.

1960s
Warringah Shire deepened the pool to encourage it to self-fill. A pump was installed, then removed after it proved of little value in controlling the erratic water supply.

2002
Real estate agents promoted Whale Beach as offering privacy, peacefulness, an unspoilt beach environment and the pleasures of swimming in the ocean pool. Few properties at Whale Beach were used only as weekenders.

This website is owned by All into Ocean Pools Inc,  a not-for-profit, volunteer community … END_OF_DOCUMENT_TOKEN_TO_BE_REPLACED