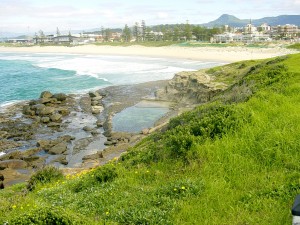 Formalised ladies baths at South Flagstaff Point developed from a ladies bathing place, that was in use for generations before a surf club existed at Wollongong’s South Beach. This ocean pool catered for lap swimmers and could stage swimming carnivals.

This is the younger of the two ocean pools created to serve the women of Wollongong and the town’s female visitors. Once a significant visitor attraction, this pool featured on early twentieth-century postcards of Wollongong and is now part of the Wollongong Harbour Heritage Trail.

Historical notes
1829
A military garrison and stockade was relocated from Red Point in Port Kembla to the boat harbour at Wollongong.

1837
300 convicts began excavation works and construction of a breakwater to improve Wollongong’s harbour.

1841
Wollongong’s population was 831, comprising 330 free males, 286 free females, 47 soldiers and dependents (39 males and 8 females) and 168 male convicts in the stockade of Flagstaff Hill. Most of the population was less than 45 years old and most had arrived as free settlers.

1856
Women and children used a bathing pool ‘the Children’s Pool’ on the south side of Flagstaff Hill as an alternative to the earlier Chain Baths.

1877
A visit to Wollongong by Mr Williams of the Harbours and Rivers Branch of the NSW Department of Public Works triggered action to formalise the Ladies Baths.

1906
A NSW Department of Lands plan of proposed sites for ladies baths shows dressing-sheds at both the Chain Baths and the Ladies Pool.

Around 1910
A photograph shows dressing-sheds above the pool and steps leading from them down to the pool.

1920
Wollongong Council refused to allow the Wollongong Surf and Recreation Club to use the Ladies Baths on Tuesdays and Thursdays, believing it unwise to ‘allow the use of ladies baths to members of the opposite sex under any circumstances’.

1923
Wollongong Council spent six pounds on repairs to steps at the women’s baths as well as making minor repairs.

1929
When it was reported that one of the males seen bathing in the Wollongong Ladies Baths was a ‘life saver of the South Beach’, Alderman Henderson suggested ‘his services should be dispensed with’.

1931
Responding to the many complaints about men swimming at the ladies baths and fishing on the rocks adjacent to the baths, Council placed a notice there and asserted that ‘men would be well advised to keep away from these baths, which have been specially reserved for ladies who do not favour the surf beaches’.

1940
The Mother Superior of the St Mary’s Convent complained to council that ‘since the dressing shed at the Ladies Baths and the Chain Baths have been demolished no facilities for dressing are now available’.

This website is owned by All into Ocean Pools Inc,  a not-for-profit, volunteer community … END_OF_DOCUMENT_TOKEN_TO_BE_REPLACED