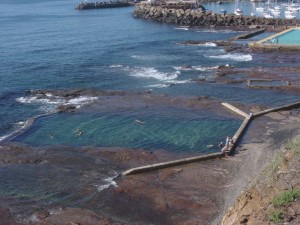 Just to the north of the Continental Baths. Easily accessed from a sealed cycleway/walking track on the site of the former tram-line from Wollongong’s Harbour to the Mount Pleasant coal mine. Featured in early twentieth-century postcards of Wollongong and still a subject for amateur photographers.

Historical notes
1829
A military garrison and stockade relocated from Red Point in Port Kembla to the boat harbour at Wollongong.

1841
Wollongong’s population was 831, comprising 330 free males, 286 free females, 47 soldiers and dependents (39 males and 8 females) and 168 male convicts in the stockade of Flagstaff Hill. Most of the population was less than 45 years old and had arrived as free settlers.

1871
Acceptance of Michael O’Toole’s tender to form a gentlemen’s bathing place on the north side of the harbour, to be known as Clarke’s Hole.

1877
Mr A. Williams of the Harbours and Rivers Branch of the NSW Public Works Department was appointed by the Minister for Works to report upon affordable mean for providing suitable baths for Wollongong. Williams decided that either Clarke’s Hole or Gibson’s Hole on the north side of the port of Wollongong  could easily be enlarged and rendered suitable for gentlemen’s baths.

1881
Subscriptions amounting to over 20 pounds were collected for improvements to Clarke’s, by now well established as the men’s swimming hole. The chairman of the meeting intended to seek assistance from the Borough Council. The meeting decided to hold an entertainment event to raise the remainder of the estimated 50 pounds required to produce 2,000 feet of bathing room ranging from four feet to seven feet in depth. Mr M. H. Moriarty, the NSW government engineer in charge of the harbour work, offered to superintend the work on the swimming hole.

1887
Following agreement that both Clarke’s and Gibson’s holes needed enlarging, there was work to improve the gentleman’s bathing place at Clarke’s Hole.

1890
Thomas Ryan was contracted to undertake blasting work to enlarge the men’s swimming place at Clarke’s Hole. Those who had made ‘their morning plunge an institution’ faced only a week of inconvenience.

The Illawarra Mercury noted that no-one could recollect seeing any ‘predatory denizen of the deep’ at Clarke’s Hole.

1896
The first swimming carnival under Wollongong’s  ‘new’ swimming club was to be held at the ‘Gentlemen’s Baths’. This was to be quite an occasion, as the town band was to play and ‘organisers expected ‘to include ladies’.

1899
The gentlemen’s bathing place excavated out of solid rock ‘east of Smith’s hill’ was from four feet to seven feet deep with a ‘concrete wall across the mouth so it remained full even at low tide and ‘as the waves are rolling over the wall, the bathers secure all the enjoyment without the danger of swimming in the open sea’.

1902
Swimming star Annette Kellerman performed at a swimming carnival at the Men’s Baths.

1912
Mr G. Williams of the Royal Life Saving Society examined A. E. Baker of Corrimal surf club and other candidates for Royal Life Awards at the Wollongong Baths.

1916
Wollongong Council permitted women, children and school classes to use the Men’s Baths at specified times. Many of the pool’s male patrons had probably volunteered for war service.

1923
Council repaired the water service to the Men’s Baths and covered the roof of the dressing shed with patent roofing protected with barbed wire.  Mayor Ald. N. M. Smith called a public meeting to discuss improvement to the Men’s Baths as proposed by Mr Lance and Mr Wiseman. Around 20 men attended the meeting and decided to erect new ‘continental’ baths, where suitably costumed men, women and children could swim together.

1926
With the opening of the Continental Baths, the Men’s Baths ceased to be Wollongong’s premier swimming venue, but still attracted regular patrons.

1929
Balgownie Public School proposed that its boys use the Men’s Baths for a weekly swimming session.

1932
Wollongong Council pulled down the dressing-sheds at the Men’s Baths and distributed the wood from the sheds to local residents. A public meeting with delegates ‘from nearly all public bodies’ agreed with the Tourist Association representative that it was advisable to rebuild the sheds, but Council claimed it had no funds available for this since the one halfpenny rate had been removed.

While waterfront structures had in the past been free, Wollongong Council now proposed to charge for the use of any new sheds to recover costs and prevent crowding. A subscription list started at the meeting raised 21 pounds and seven shillings towards sheds estimated to cost between 70 and 125 pounds.

1940
Wollongong Council’s engineer was investigating what could be done about the seaweed in the Men’s Baths. Sand continued to silt the north-west corner of the Baths. Finally to overcome the objectionable smell of decaying weed, the pool’s seawall was broken to permit partial drainage. Apart from ‘minor efforts to alleviate any nuisance’, the Council engineer then recommended leaving the baths in this condition until the next swimming season.

Complaints about the dangerous condition of the pathway leading to the Men’s Baths did prompt Council action.

1947
While Wollongong was one of the oldest municipalities in NSW, parts of the present-day City of Wollongong once belonged to other local government areas. Central Illawarra Shire, North Illawarra and Bulli Shire were amalgamated with the Municipality of Wollongong to form the City of Greater Wollongong in 1947.

1974
Wollongong Council proposed concreting over the rock pool between Belmore Basin at Wollongong Harbour along to the Continental Pool in order to provide parking for 60 boats with trailers. Strong community opposition led to the proposal being rejected.

1984
To improve the use of Wollongong Harbour, the NSW Department of Public Works  proposed concreting over the rock pool between Belmore Basin at Wollongong Harbour along to the Continental Pool. Council unanimously rejected the proposal.

1993
A walkway/bike path led from the park near the North Wollongong surf club to Wollongong Boat Harbour and the rock pools.

1997
A Wollongong man swimming at the North Wollongong rock pool was caught with an illegal haul of sea snails, 240 snails over the limit of 20. The man told police he intended to cook and eat the shellfish. Fisheries authorities had to determine whether that man received a $300 penalty notice or the maximum penalty of three months in jail and a $10,000 fine.

2000
A shark a little more than a metre long either washed into the pool or was put there by pranksters.

2002
The men’s baths were still accessible, safe, available to all at all hours, used by a significant number of people and considered to present few public liability problems for Wollongong City Council.

This website is owned by All into Ocean Pools Inc,  a not-for-profit, volunteer community … END_OF_DOCUMENT_TOKEN_TO_BE_REPLACED