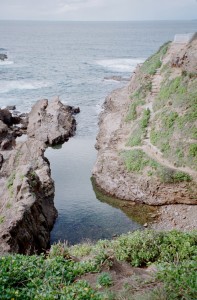 Low concrete piers dam the water in this pool, the oldest of Wollongong’s ocean pools, one of the oldest ocean baths on the NSW coast. Sited south of Pulpit Rock at Flagstaff Point, below the lighthouse amongst rocks in a small sheltered cove.  Access from the top of the hill is by a steep, eroded, narrow path chiselled into the sandstone rock and lacking a handrail.  Once fitted with a series of chains from which dangled large rings that bathers could grasp. A significant tourist attraction from the 1840s and featured on early twentieth-century postcards of Wollongong.

1829
A military garrison and stockade relocated from Red Point in Port Kembla to the boat harbour at Wollongong.

Mid-1830s
The pool site was used for women’s bathing. A natural depression in the rock platform formed the pool and a barrier of rocks at the mouth of the cove broke the wave action.

1839
Lady Jane Franklin’s diary records ladies using a ladder to get to the pool for bathing and that military officers had erected a hut for the use of the ladies. The top of the hill had barracks for 30 troops of the 85th regiment and huts housing about 115 convicts engaged in harbour works.

1841
Wollongong’s population was 831, comprising 330 free males, 286 free females, 47 soldiers and dependents (39 males and 8 females) and 168 male convicts in the stockade of Flagstaff Hill. Most of the population was less than 45 years old and had arrived as free settlers.

1842
Governor Gipps arranged for convict labour to upgrade the ladies bathing place at Flagstaff Hill. A winding path led around the point and down to the pool, which could be reached at low tide by a set of smooth slab steps. A ‘rock curtain’ formed the outer edge of the pool. Ropes rather than chains were provided as a safety measure in the deeper parts of the pool. A palisade fence at the top of cliff screened bathers from public view.

1856
A new fence was erected around the top of Flagstaff Hill to preserve the privacy of female bathers. Bathers posted sentinels to counter ‘peeping toms’ and ‘well dressed prowlers’ or used an alternative pool on the south side of Flagstaff Hill. Repairs to a small building and other improvements funded by subscriptions solicited by Mr Faire and Mr Owen were carried out in December 1856. While repair work was going on, ladies were asked not to visit after 9am.

1858
Ladies bathed at Flagstaff Point the whole of the summer, even though ‘a well-dressed blackguard’ caused one lady ‘considerable fright and annoyance’ by ‘prying and prowling’ around the ladies bathing place ‘while she was performing her ablutions’ and the Illawarra Mercury suggested that the Chief Constable should look into such unmanly and despicable conduct.

1877
Mr A. Williams, an engineer of the Harbours and Rivers Department, who had been appointed by the NSW Minister for Works to report upon affordable means for providing suitable baths for Wollongong, decided the old bathing place on Flagstaff Hill was the best site for ladies baths

1878
Aldermen visited Flagstaff Point seeking a bathing place for ladies as ‘the north side of the harbour is altogether too exposed and public for a ladies bathing place’.

1881
A public meeting at the Council Chambers to raise subscriptions for improving the men’s bathing place, also canvassed the need to clear the ladies bathing place of material that had been swept into it.

1889
The new improved ‘ladies bathing place’ at Flagstaff Hill opened for use complete with a wire rope strung across the deeper portions of the pool ‘for bathers to use as may be desired’ and to assist timid and disabled bathers. The water beyond the rope was ‘deeper than should be ventured by persons unable to swim’.

1891
Council’s Bathing Committee asked that a new fence be erected around the top of Flagstaff Hill to preserve the privacy of female bathers. The pool still had a dressing-room, possibly the original one.

1895
Council granted 50 pounds for improvements to the ladies baths. This work included removal of large stones and, even more importantly, erecting a fence around the top of the hill ‘to prevent persons looking down into the bathing place’.

1897
The Wollongong City Council Library holds a photograph of the baths dated around 1897 referring to it as ‘the Ladies Chain Baths or Lovers Gully’ and to Wollongong as a ‘south coast summer resort’. Council’s bathing committee inspected the baths in 1897 and recommended that half-inch galvanised iron chain be hung across the baths and from them pendant chains three-eights of an inch thick hung to the level of the water’. The metal rings used to attach the chains still protrude from the rock walls of this pool.

1906
A 1906 plan shows a dressing-shed with a toilet at the rear west of the baths and ‘masonry’ walls at the mouth of the cove.

Around 1910
A photograph shows the chains and rings still hung across the pool.

1920
A Council inspection report recommended that the existing dressing-shed ‘be halved and the material from one portion thereof be used to close in and make a serviceable shelter one half the original size’.

1940
The Mother Superior of St Mary’s Convent in Harbour Street complained to Council’s Parks and Gardens Committee that since the old dressing-shed had been demolished, there were no dressing facilities available at the pool.

1950s
Wollongong’s nuns were still using the pool and taking students from St Mary’s College to swim at the pool.

1960s
The pool was still in use and more commonly known as the Nuns Baths or Nuns Pool, rather than by its earlier name of the Chain Baths.

2002
Extensive steep steps and a failing hand rail led to the pool’s refreshing and safe waters and to rocks where the chain eyelets were still visible. The pool’s few visitors and its very dangerous access conditions led Wollongong City Council to contemplate minimising its public liability risks by demolishing the pool’s concrete walls and returning the Nuns Pool to a completely natural state.

2003
Although the pool was visited only occasionally each week, a heritage report recommended against demolishing the Nuns Pool.

This website is owned by All into Ocean Pools Inc,  a not-for-profit, volunteer community … END_OF_DOCUMENT_TOKEN_TO_BE_REPLACED