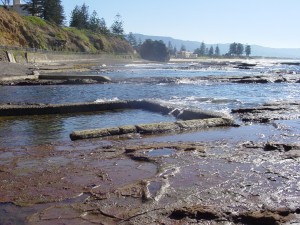 Ghost pool. Remnants of a small square pool created immediately beside the men’s pool on the rock platform on the open beach on the north side of the Belmore Basin at Wollongong. Easily accessed from a sealed cycleway/walking track on the site of the former tram-line from the Harbour to the Mount Pleasant coal mine.

Historical notes
1829
A military garrison and stockade relocated from Red Point in Port Kembla to the boat harbour at Wollongong.

From the mid-1830s
Children in Wollongong bathed with their mothers at the Chain Baths (Nuns Pool).

1841
Wollongong’s population was 831, comprising 330 free males, 286 free females, 47 soldiers and dependents (39 males and 8 females) and 168 male convicts in the stockade of Flagstaff Hill. Most of the population was less than 45 years old and most had arrived as free settlers.

1850s
Wollongong was one of the oldest municipalities in NSW.

Children in Wollongong still either bathed with their mothers at the Chain Baths (Nuns Pool) or from 1856 in the Ladies Pool facing South Beach.

1920s
Construction of a Toddlers Pool at Clarkes Hole.

1930
A storm created heavy seas that reportedly ‘washed away’ the Toddlers Pool.

1932
Wollongong Council removed the dressing-shed for the gentlemen’s and Toddlers Pool. After this unpopular decision, new concrete sheds were erected further back from the pool’s edge.

1947
While Wollongong was one of the oldest municipalities in NSW, parts of the present-day City of Wollongong once belonged to other local government areas. Central Illawarra Shire, North Illawarra and Bulli Shire were amalgamated with the Municipality of Wollongong to form the City of Greater Wollongong.

1950s
The toddler’s pool was rebuilt, reportedly by volunteers. This quick, cheap rebuild did not include horizontal reinforcement, vertical anchors or tie-downs to fix the concrete structure to the rock platform.

1970s
Photographs show the walls of the Toddlers Pool were in good condition.

1994
A structural investigation of Council-owned rock pools and saltwater pools rated the Toddler’s Pool as a ‘minor safety hazard, particularly to children who may be encouraged to play in it’.

2003
The Toddlers Pool was still used occasionally, even though it no longer retained water at low tide, was generally in a very poor condition with a concrete floor that was severely cracked, broken and eroded. Its concrete blocks were considered unsightly and of little significance and proposals for its removal were widely accepted. The Stedinger study recommended that archival recording of the pool be lodged in the Wollongong City Library. The site itself was considered to have some historical and associational significance.

This website is owned by All into Ocean Pools Inc,  a not-for-profit, volunteer community … END_OF_DOCUMENT_TOKEN_TO_BE_REPLACED