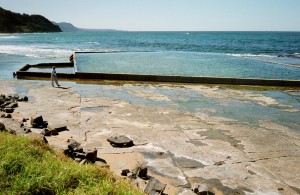 A main pool linked to a wading pool, on a wide rock platform. Photographers have created memorable images of this pool.

1916
The new railway platform a mile south of Scarborough at Brown’s Bridge was named Wombarra.

1937
The Bulli Shire Council engineer thought future enlargement efforts should focus on the more accessible and better-situated Wombarra baths, rather than the Scarborough Baths.

1938
Bulli Shire Council was asked to expedite work on the Wombarra Baths.

1940
The Scarborough-Wombarra surf club complained that the baths at Scarborough and Wombarra were not fit for swimming.

1942
No funds were available to clear a fair amount of seaweed from the Wombarra Baths.

1944
The Scarborough-Wombarra Progress Association tried to identify the people responsible for the unsanitary state of the Wombarra baths and lavatory with a view to taking action against them. The Bulli Shire Clerk estimated the Wombarra Baths needed a new brick dressing-shed with tiles, showers and lavatories amounting to 500 pounds which could be funded through a new Council rate. Bulli Shire agreed to call tenders for the work with approval from the Department of War Organisation as soon as possible.

1945
Work on the Wombarra Baths dressing sheds was postponed until after a water service was provided at the Baths.

2003
After the contentious closure of a stretch of the coast road between Coalcliff and Clifton forced visitors from Sydney to head south on the F6 freeway and descend to the coast via the Bulli Pass.

This website is owned by All into Ocean Pools Inc,  a not-for-profit, volunteer community … END_OF_DOCUMENT_TOKEN_TO_BE_REPLACED