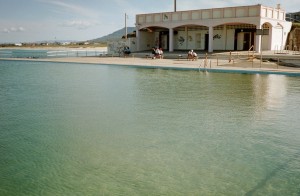 Good pool for lap swimmers. Distinctive dressing-pavilion.  Photographers have created memorable images of this pool Within eyeshot of the Bulli Baths.

Historical notes
late-1800s
Bulli-Woonona was a coal-mining area, ‘Black Diamond’ country. The panoramic view from the top of the Bulli Pass attracted  tourists.

An ocean pool was created at Collins Rocks in 1898.

The publican of the Woonona Royal Hotel donated a keg of beer to the volunteer workers. Euchre parties helped raise money for the pool.

The South Coast Times warned its readers that ‘any loud report’ over a weekend at Woonona would be due to the surf club blasting out the rock for the baths and not ‘the British fleet’. The new baths incorporated a 12-foot floodgate to keep the baths full.

1925
Voluntary work on the baths continued into 1925, when the Woonona Surf Club Baths Committee appealed to the Bulli Shire to levy a rate of one halfpenny in the pound so the work at Collins Rocks could be completed by contract labour. Council advised the Progress Association of the proposed rate.

1926
The Tramway Swimming Club from Sydney visited Woonona Beach and was surprised at the excellent swimming facilities.

1927
The Bulli Shire Engineer assured a Council meeting that the preliminary work on the Woonona Baths was complete and progress would soon become more evident.  The Woonona Swimming Club formed.

1928
By March, the Woonona Baths were completed and a carnival at Easter considered for the opening. Photographs of the baths show the viewing platform on top of the change-sheds.

Later that year, a member of the Bulli Amateur Swimming club visiting the Woonona Baths rescued ‘a little chap who had got out of his depth’ .

1929
The official opening of the Woonona Baths was scheduled for 26 January 1929 after an enthusiastic meeting at the School of Arts. The Progress Association and the Swimming club participated in designing the program, surf club members undertook the catering and the Bulli-Woonona Band provided music. Apart from 100 yards and 200 yards championship races, there were shorter races for ladies, boys and girls, even  beauty events as well as baths events were open to all members of the swimming and surf clubs.

Convinced that teaching children to swim was ‘very worthy of encouragement’, Bulli Council granted the Woonona Public School exclusive use of the baths on Friday from 1.30pm to 3.30pm. The Council had requested a subsidy from the Education Department for this purpose without success.

The Woonona Swimming Club recommended people to act as beach inspectors, asked Council for the loan of shovel to remove sand from the baths and for the sole right to run the kiosk on the beach. The Woonona Parks and Baths Committee made recommendations on inspectors, camping fees, repairs to the dressing-shed and calling of tenders to cater for the public at the beach and baths. As recommended by the Woonona Parks and Baths Committee, Bulli Council endorsed the three proposed inspectors for the baths and the six inspectors proposed for the beach, on the grounds that the baths were some distance from the beach.

1930
Woonona Amateur Swimming Club held an Australia Day carnival at the Woonona Baths with events for boys and ladies as well as open events and underwater swimming events, diving events and novelty events such as pillow fights and a sackrace.   Quite a crowd attended a March carnival at the Woonona Baths. The swim team from Austinmer won the overall program that included swimming races, diving and a pillow fight.

1932
The Woonona Amateur Swimming club limited itself to local activities.

1933
The Woonona Amateur Swimming club organised carnivals at the Baths for Boxing Day and for January 26 when over 100 swimmers from Sydney would compete.

1934
The Woonona Amateur Swimming Club held a carnival at the baths with swimmers from the Oatley and St George clubs to ‘foster swimming on the South Coast and raise it to the place it occupied two years ago’. Woonona swimmers competed against other club swimmers at Sydney pools, including the Domain Baths, and also adopted the training practices used by Sydney’s champion swimmers, Noel Ryan and Boy Charlton.

1937
After the Woonona Swimming Club complained that it was impossible to keep the sheds clean, Council called tenders for this work. The Woonona Progress Association suggested purchase of a pump to remove sand from the baths. The Woonona Swimming club held its 10th annual swimming carnival. The headmaster of the Corrimal school was given permission to use the Woonona pool for his school’s swimming classes.

1938
The Woonona Parks and Beaches Committee wanted installation of a pump and other baths improvements such as attention to the small springboard at the south end of the baths, construction of a children’s pool on rocks south of the baths, levelling the area in front of the shelter,  and using a new form of valve to empty the Baths.   The NSW Department of Works and Local Government decided the plans and specifications submitted for the proposed work at Woonona Baths were unsatisfactory.

The Woonona Swimming Club competed in the 1938 Country week carnival in Sydney and an AIF carnival at Manly.

1940
The Bulli-Woonona Progress Association was complaining that there was so much sand on the road from the station to the baths that people in cars had to turn back. Improvements were needed at the baths, especially to the pumping plant. The Woonona surf club asked that a couple of conveniences be erected at the beach, rather than at the Baths.  The Woonona Parks and Beaches Committee asked Bulli Council why the gates had not been replaced at the Woonona Baths after they had been cleaned out and when the children’s baths would be complete. Council’s engineer explained that they had stopped trying to use the tractor to clean the Woonona Baths because sand got into its working parts.

1942
No funds were available to clear a fair amount of seaweed from the Woonona Baths.

1994
The original pavilion was demolished.

2004
A Woonona resident complained he spent all his time picking up the spent fireworks that littered the pool area.

This website is owned by All into Ocean Pools Inc,  a not-for-profit, volunteer community … END_OF_DOCUMENT_TOKEN_TO_BE_REPLACED