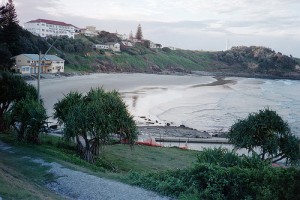 1830s
Cedar-getters reached the Clarence River, the biggest river on the east coast of Australia.

189os
Yamba was the seaside resort for Grafton and other communities along the Clarence River.  The 1890s also saw the closure of the Yamba quarry, that had provided the rock  used  to construct training walls providing ships with a safer entry into the Clarence River.

Early twentieth century
Yamba had a Surf Lifesaving Club by 1908, thriving guest-houses and hotels and an expanding fishing industry. The lack of a convenient rail connection to major cities, the poor quality of the roads, dramatic sand drifts which threatened to bury parts of the town, the Depression and World War II all constrained Yamba’s further development.

1962
After public baths were opened in the upriver town of Maclean, the Maclean High School no longer used Yamba’s quarry pool for swimming and lifesaving classes.

1968
Complaints about pollution at the quarry pool, plus a health inspector’s confirmation that the pool was a health hazard convinced Maclean Shire Council to build an ocean pool at Yamba’s main surfing beach.

1976
When the ocean pool failed to satisfy rising community expectations of a public pool, a public meeting pressed for construction of an Olympic-size pool. A swimming club was formed to make that pool project eligible for a NSW government grant.

1976 to present
Despite being superseded as a sporting venue by Yamba’s  inground Olympic pool, the ocean pool remains a tourist attraction and a significant local recreational facility.

This website is owned by All into Ocean Pools Inc,  a not-for-profit, volunteer community … END_OF_DOCUMENT_TOKEN_TO_BE_REPLACED